[This article was first published on free range statistics - R, and kindly contributed to R-bloggers]. (You can report issue about the content on this page here) Want to share your content on R-bloggers? click here if you have a blog, or here if you don't.
ShareTweet

A couple of months ago my Twitter feed featured several mass-participation stern critiques laced with sneering and mockery (aka “Twitter pile-ons”) for some naive regression modelling in the form of lines of best fit through scatter plots. All of the examples I’ve seen deserved some degree of criticism, but not to the virulent degree that they received. And there is an interesting phenomenon of righteous anger in some of those who criticise others’ regression that is dependent on quite outdated views of what is and isn’t acceptable in a statistical model.

Take this Australian example, which generated many virulent and scathing comments including the Twitter thread from which I saved this screenshot: 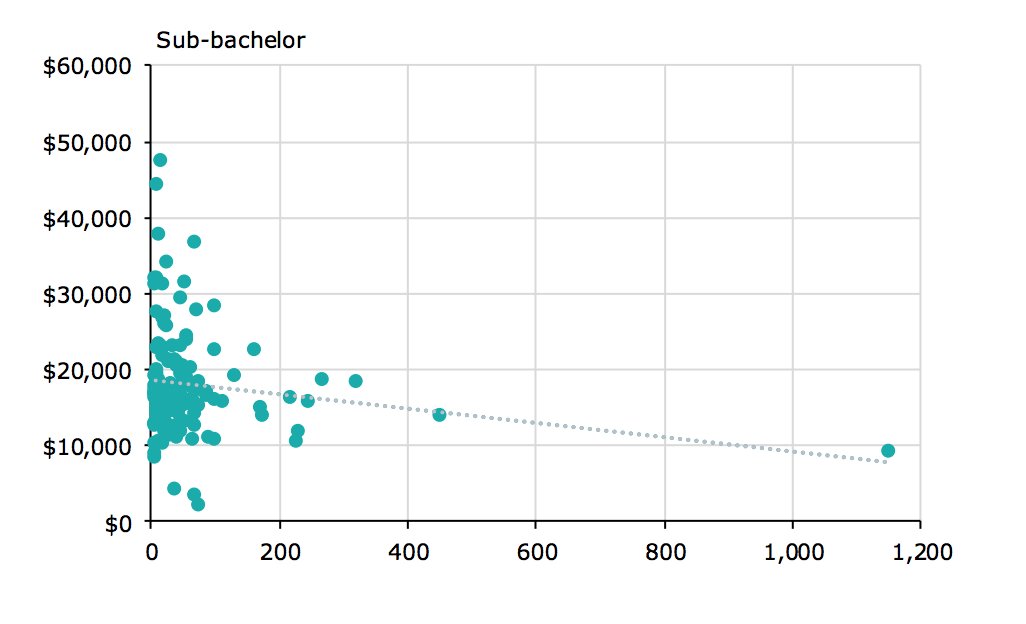 The horizontal axis is average number of students per subject; the vertical axis is the cost to the university per student (this is clearer from the original report, but yes, the graph should be self-sufficient enough to withstand being screen-snipped out of context).

The report in question was a summary of a data collection exercise to estimate costs of higher education delivery (and to a much lesser extent, the drivers of those costs). It was one of the key technical inputs into sweeping changes the Australian government has proposed for the funding of the higher education system. Judging from the Technical note for the Job-ready Graduates Package, the student and commonwealth contributions to funding are to remain based on field of education and this crude model of economies of scale does not feature directly in the proposals, even it influenced the thinking (correct me if I’m mistaken please, higher education experts, I know you are out there). However, tempers are running even hotter than usual on higher education funding at the moment so it is not surprising that a report from a consultancy firm (Deloitte in this case) would undergo extra scrutiny when known to be informing controversial policy changes.

“These analyses would be improved by using robust methods, reporting uncertainty, and log transforming both variables before the linear fit; but not by enough to justify the outrage they seem to have provoked.”

Some criticisms are fair

Here are the criticisms made that are fair, in what I see as descending order of importance:

If Deloitte had taken criticisms 1 and 2 (which also deals with 3) into account, and better explained 5, I doubt that 4 matters very much, and they could have saved themselves what I presume was an unpleasant couple of weeks on social media. Anyway, that’s certainly one lesson we have filed away for our own reference at my own work (which, to be clear for disclosure reasons, is at Nous Group, a management consultancy in competition with Deloitte for work like this).

Some misconceptions about regression estimated with ordinary least squares

I won’t try to summarise all the criticisms of this chart, but I will make some observations about why some of them were not as conclusive as the critics believed:

To understand whether my instinct was right about the criticisms of the data being too virulent, but in the absence of the original data (which would be confidential due to the universities’ cost data), I set out to simulate some data that might resemble the original. Here is my best go at data that I have synthesised to resemble the original in terms of the slope and intercept of the ordinary least squares line, and my visual estimate of the distribution of the x and y.

Here’s how I simulated that. As x is the number of students per course, I modelled it with a negative binomial distribution, always a good choice for counts that have more variable variance than a Poisson distribution. I truncated that x distribution at 350 and manually added x values of 460 and 1150 to match the two outliers in the original.

I used the approximate values of y on the original line of best fit at x=0 and at x=1000 to estimate that line as y = 19000 - 9.5x. Then, taking my x values as given, I set out to simulate data from a model log(y) ~ log(x) that , when you fit an OLS line to it, would come as close as possible to sloped of -9.5 and intercept of 19,000. In this model I let log(y) have a scaled t distribution with 13 degrees of freedom, so it has fatter tails than a Normal distribution. If x is less than 100 the variance gets further inflated by 1.8, needed to get data that resembled the original which has a particularly high variance at low values of x. The values of this inflator, the 13 degrees of freedom, and the scaling factor for the t distribution I determined on by trial and error.

To get the slope and intercept of the log(y) ~ log(x) relationship, I wrote a function that takes a set of parameters including that slope and intercept of that log-log regression as well as the characteristics of the t distribution, and returns an estimate of how well an OLS line fit to y ~ x matches the desired slope and intercept of -9.5 and 19,000. To increase the realism, I also added penalties for how far out the maximum, 5th and 50th percentile of the simulated y values were from my eyeball estimates of the original.

Simulating data to optimise for the above gives me a slope and intercept on the log-log scale (which I am claiming is the underlying relationship) of -0.041 and 9.84. Creating a synthetic dataset on this basis gets me the values of x and y in my chart above.

This may seem a lot of effort but is of potential use in more realistic situations, including creating synthetic data when confidentiality or privacy concerns stop us publishing the original. Here’s the R code that does all of that, as far as producing the chart above:

OK, so now I have data that is definitely not generated from a simple homoskedastic, no-outliers, no-leverage, linear, normally distributed model. Instead, my data has extreme and non-continuous heteroskedasticity, x values with high leverage, a relationship that is linear in the logarithms not on the original scale, and residuals are from a fat-tailed t distribution with two distinct levels of variance. I think we can safely say we have violated lots of the usual assumptions for inference with OLS including the Gauss-Markov conditions.

However, I still maintain that the OLS line is not completely meaningless here. After all, it does tell us the most important thing - as x gets bigger, y gets smaller. Sure, not in any precise way, and indeed in an actively misleading way because of the non-linearity, but I still think it is something.

How different would alternative ways of estimating a line be with this data, which is plausibly like the higher education original?

Here is a line drawn with robus linear regression estimation of the slope and intercept, and in particular MASS::rlm() using “M-estimation with Tukey’s biweight initialized by a specific S-estimator”. This method selects an estimation algorithm with a high breakdown point. The breakdown point of an estimator is how much of the data needs to be replaced with arbitrarily extreme values to make the estimator useless. It can be illustrated by comparing a mean with a 20% trimmed mean as estimators of the average. The mean has a breakdown point of 1/n - change a single value to infinity and the mean also becomes infinity. Whereas the trimmed mean can cope with 20% of values being made infinity and another 20% minus infinity before it suffers. In summary, using this M estimator should be more robust to any high influence points, such as (according to criticism on Twitter), the high leverage point on the right. However, we see that the result looks pretty similar to the OLS line - reflecting the fact that high leverage does not imply high influence:

Thanks to the wonders of ggplot2, this sophisticated modelling method can be applied on the fly during the creation of the graphic:

So much for the leverage/influence problem. What about the non-linearity? There are several ways of approaching this, and one which I might have tried if dealing with this data in the wild would have been a generalized additive model:

This isn’t bad and I think is a good intuitive description of what is happening in this data. “At relatively low values of x, y decreases as x increases. For higher values of x there isn’t enough data to be sure.” R code for this model:

Alternatively and more traditionally one could have taken log transforms of both the x and the y variables and fit the regression to those transformed values. This reduces the heteroskedasticity, leverage of x values, and non-linearity problems all at once, stops y ever becoming negative, and gives a nice interpretation to the slope as a standardised elasticity. There’s a reason why it’s such a common transformation!

Here’s how that would look, if shown on the original scale:

… or if we transform the x and y axes as well:

In this case I have fit the model explicitly before starting my ggplot2 pipeline; for anything beyond the basic these days I find it easier to keep track of what is going if I separate the modelling from the visualisation:

The model with log transforms is probably the best with this data, but we can’t be sure if that’s the case for the original data; my synthesised data was created with a linear relationship of the two log-transformed variables, so it’s not terribly surprising that the model has a nice fit.

So what’s the point of all this? I think there’s three key interesting points I’d make out of the whole exercise:

ShareTweet
To leave a comment for the author, please follow the link and comment on their blog: free range statistics - R.
R-bloggers.com offers daily e-mail updates about R news and tutorials about learning R and many other topics. Click here if you're looking to post or find an R/data-science job. Want to share your content on R-bloggers? click here if you have a blog, or here if you don't.