Last year I spent a bit of time learning about routing and network analysis. I created a map of distance from each GB postcode to the nearest railway station. At the time my local council were also looking at changing school catchments and building new schools. This also seemed like an excellent project for routing analysis. I made some progress on this, but never wrote it up.

One aspect I was really interested in was common routes. When you create a shortest path network from many points to a single destination you get a lot of lines which converge on the same place. Can we use this for anything else? Can we count how many lines share the same pathways? This would be particularly useful for prioritising investment in safe routes to school, or walking and cycling infrastructure.

I was spurred to look at this analysis again from the tweet below:

Have to question the merits of people coming from the west driving across the city centre to get to St James’s Ctr.

For background, the St James’s Centre in Edinburgh is being demolished and a new shopping centre built to replace it. There’s been a lot of (justified) complaint surrounding the new road layout at Piccadilly Place, because it prioritises motorised traffic over more efficient and effective ways of transporting people in cities (foot, bike, bus and tram). On top of this, the new St James’ centre will have a greatly increased number of spaces for parked cars (1800 from 550. With 300 for residents).

Scott’s tweet made me think about catchment area for the St James’ centre. How far away are different parts of Edinburgh? Which roads would be most travelled to get there? If one increases the number of parking spaces at a location, surely the number of cars travelling to that location will increase. What will the impact on the road network be?

There are some great resources to help us with this. The data source I’m going to use is Ordnance Survey OpenData. In particular we need Open Roads and CodePoint (postcodes). Software I’ll use for this task are QGIS, GRASS GIS and R. These are open source and require a little practice to use, but the effort pays off!

After reading data into GRASS I calculated the distance network from all postcodes to the St James’ Centre:

We can see the results of this below:

Shortest road distance between each EH postcode and the St James’ Centre.

We can also zoom this map on the area inside the bypass and adjust the colouring to give us more resolution for shorter distances. 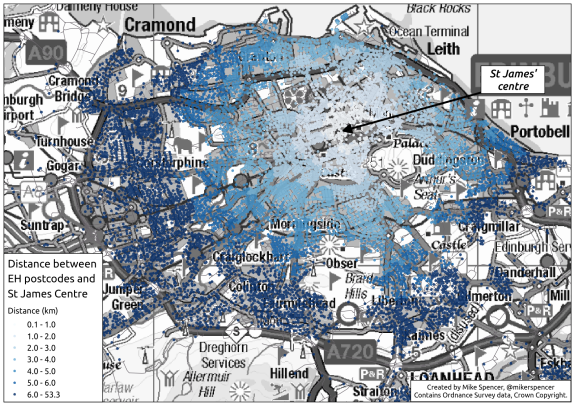 Shortest road distance between each EH postcode and the St James’ Centre, zoomed on the area within the Edinburgh bypass.

Now we can use R to investigate how many postcodes are within these distances. R can talk directly to GRASS, or we can use the exported shp file. 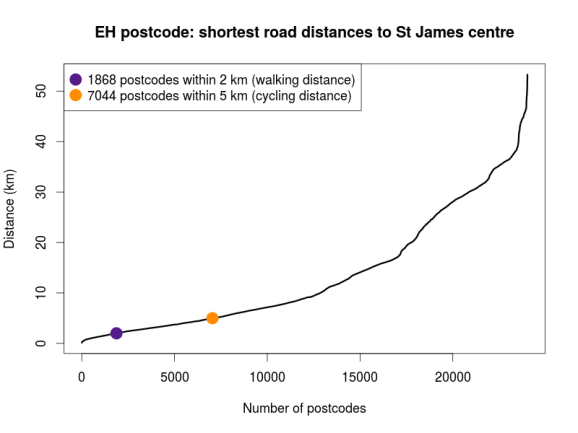 Ranked distance between EH postcodes and the St James centre, with markers for walking and cycling distance.

As we can see, 1868 postcodes are within walking distance of the St James’ Centre and 7044 within cycling distance. If we

then 8 % of total customers are within walking distance (2 km), a further 22 % are within cycling distance (2-5 km) and the remaining 70 % would need to travel by other means. I wonder if there will be 330 cycle parking spaces at the St James centre? This would be proportional to the number of car parking spaces. This assumes that those beyond cycling distance need to drive, but much of the population will be near a bus stop.