[This article was first published on datum » R, and kindly contributed to R-bloggers]. (You can report issue about the content on this page here) Want to share your content on R-bloggers? click here if you have a blog, or here if you don't.
ShareTweet

While reading this article over at Fangraphs I was inspired to ask myself “what would Matt Kemp have to do between now and then end of his career to be seriously considered for the Hall of Fame?”.  This question comes out of

1) Being a Dodger fan

2) Romanticizing the idea of watching a HoF player’s entire career develop from beginning to end.

Assuming what the author of the above mentioned Fangraphs article assumes, that Andre Dawson is the baseline for the HoF and reducing it to the simplest case of cumulative WAR, the question is how much more WAR does Kemp need to match Dawson?  Well, 49.1 is the answer.  Matt Kemp’s WAR progression is actually pretty interesting in that prior to his terrible 2010 season he was improving at a rate that fits a simple regression line with an R-squared of 0.997.  That’s right, he was moving along in almost exactly a straight line.  But what is even more interesting is that even with his dip in 2010 he actually hopped right back on that regression line in 2011, as if 2010 had never happened (actually if you exclude 2010 then the R-squared drops all the way down to 0.977).  He actually improved 2 seasons worth in that time.  Assuming that he continues on that same line, which is totally reasonable as most HoF-ers have at least one 10+ WAR season, then he will be at 10.2 WAR and his first seven seasons as compared to Dawson’s will look like the following: 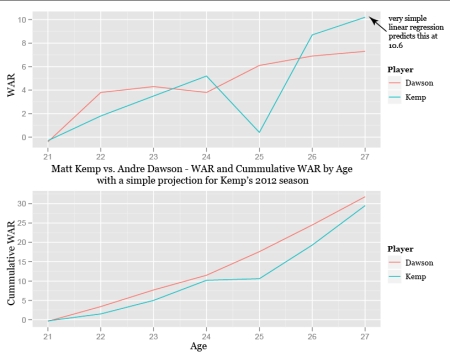 As you can see Andrew Dawson really shined as a rookie (hence the RoY award) and Matt Kemp’s 2010 season is really going to hurt him in cumulative WAR.  It isn’t impossible for him to catch up at this point but he will have to have a string of really stellar seasons and/or quit before he gets too old and into that negative WAR territory.

Below is a look at some key offensive statistics of the two players over their first six seasons. 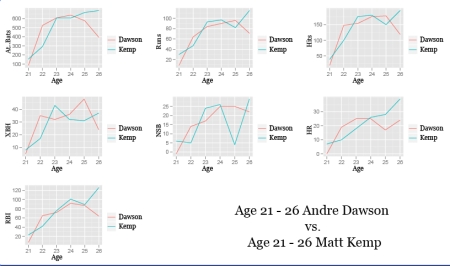 A discussion of whether or not a player with only 6 major league seasons under his belt is HoF worthy is obviously quite premature.  And HoF voting is largely subjective and not based on standardized metrics like WAR.  Nevertheless, with the season that we saw from a player with absolutely no protection in his line up, driving in 126 runs with something like 127 runners on base ahead of him all season I don’t think this is too far out of the realm of possibilities.

ShareTweet
To leave a comment for the author, please follow the link and comment on their blog: datum » R.
R-bloggers.com offers daily e-mail updates about R news and tutorials about learning R and many other topics. Click here if you're looking to post or find an R/data-science job. Want to share your content on R-bloggers? click here if you have a blog, or here if you don't.