By Stevie P
[This article was first published on Rolling Your Rs, and kindly contributed to R-bloggers]. (You can report issue about the content on this page here) Want to share your content on R-bloggers? click here if you have a blog, or here if you don't.
ShareTweet

As we move into the Holidays I’m reminded of the family reunions taking place the world over and how such encounters can sometimes lead to skirmishes initiated by unsolicited advice  – “Let me tell you what your problem is” or “When are you going to get a real job ?” While I can not help you navigate the troubled waters of family politics, I do sometimes see similar behavior exhibited within the Data Science community particularly as it relates to graphics packages and whether Base R conventions have a place alongside the tidyverse or if data.table is truly superior to dplyr. For practical purposes I’ll focus on R graphics packages in this post.

Whatever approach you prefer will depend on your background, what you are trying to do, in what time frame, and for whom. I won’t contribute to the ongoing and never ending “R vs Python for Data Science” battle just as I won’t claim that one graphics package is superior to all others. They all have considerable strengths. Historically, Base graphics has been there all along, followed by lattice and then ggplot2. There is also the very cool Grid package which provides powerful low level functions (used by the other packages). So my how the R family has grown. This has also led to inter-family squabbles which I feel are unnecessary.

“Back in my day, we made our histograms by hand”

Interestingly, I recently encountered someone who referred to herself a “ggplot programmer” as opposed to, for example, an “R Programmer“.  While it does not bother me that the tidyverse provides a well-conceived point of entry into the world of R, it DOES bother me that someone might then suggest that the previous ways of dealing with things  have somehow become invalid or inferior. Many of my students go on to work at places like the CDC which has a large body of R code that involves liberal use of Base R functions and supporting logic, thus I wouldn’t be doing my job unless I made sure they knew something about it. Put another way, Base Graphics is not the “drunk uncle” of R visualization tools – a beloved aging family member who refuses to acknowledge that their prime occurred years ago – (I’m thinking Uncle Rico from Napoleon Dynamite as I write this). I tend to use a combination of approaches (both old and new) but then, in my family, I’m the “peace maker” / diplomat so I try to focus on the positive aspects contributed by each.

An Example Is In Order

I have an example that I hope will provoke some thought. The mlbench package has a data frame called PimaIndians which contains mostly measured / continuous data on 768 participants who have also been labelled as having diabetes or not.

I will use Base graphics to make a series of boxplots that compare all features for each level of the diabetes factor which is either “pos” or “neg”. The biggest “hack” here is the use of the as.formula() function to coerce a character string into something that can be then be parsed / recognized by the boxplot() function. To me, this isn’t a hack at all, it’s merely using a long existing function as it was intended. In fact most of the cognitive load here relates to understanding the as.formula() function and perhaps the par() function neither of which produces the actual boxplot. I also realize that the resulting figures do not share a common axis which is something that one would typically want although, again, in this case, I just wanted to get a look at the data with each feature reflecting its respective scale.

What About The Tidyverse ?

Now consider the following code which uses elements of the tidyverse to produce a similar plot. In particular, we use the gather() function to reshape the data into a tidier format that lends itself to plotting with ggplot() 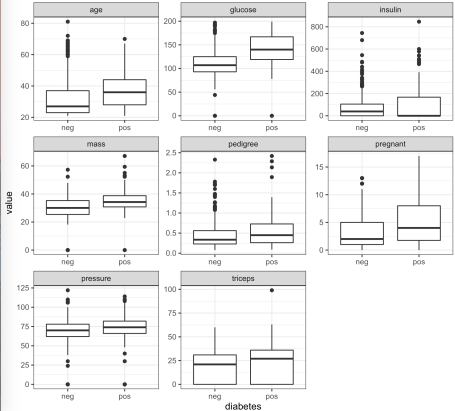 Which is the better figure ? Note, I’m NOT asking which figure LOOKS better but rather which approach is the best. Sorry for the abuse of all caps but I needed to make a point.

The Base graphics solution feels very natural to me as someone who entered the world of graphics programming by using “primitives” to build plots in layers which works well with the “pen on paper” model adopted by Base graphics. Once you draw something in the plot window then it’s there. You can draw over it , but sometimes it’s just as easy to start over. When I want to reproduce a plot I’ve seen in a scientific journal, (or even a consumer graphic in a newspaper). I can usually knock it out using a combination of high and low level Base graphics commands in about half the time it would take to produce a comparable ggplot or lattice version.

On the other hand, I appreciate the elegance and flow of tidyverse packages which allows me to think more about shaping data (and what I want to do with it) more so than the underlying options specific to a given geometry (well most of the time). To be fair, ggplot also allows one to build a plot in layers which becomes essential when reproducing against a reference example. Both lattice and ggplot will do a lot of the heavy lifting for you which is truly a marquee feature though sometimes you will definitely need to first decompose an intended plot into the appropriate aesthetics, mappings, geometries, etc. It could be argued that that is an essential step anyway. I once had a student ask, “How do I keep ggplot from doing so much for me “. Of course, as one acquires more experience then custom annotations and plots become much easier so there is an answer to that question.

In any case, were I to give someone an assignment to reproduce the plots above, I wouldn’t care what they used. Particularly for exploratory work – use whatever you darn well want.

Here is another Base graphics solution for creating density plots from the same data. I showed this to a ggplot2 advocate who then left the room ! Granted there are some ways to clean up the code but then I didn’t spend very much time on it all and still managed to get a decent result. As with the previous Base example, most of the confusion one might experience in looking at this code relates to prepping the data and making the input variables palatable to the density function. Nothing here is a “hack” if you already know about manipulating formulae in R which I believe is a reasonable expectation. 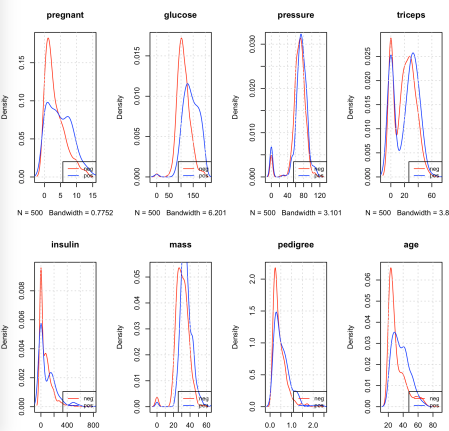 Lastly, I made a comment in this thread about how using Base R graphics simplifies the ordering or bar charts which is something that takes a few extra steps in ggplot. As an example, I tossed out the following of how to do it in Base R using the composite function approach.

I received a response that the following would work although it, like the example above, horrified my tidyverse colleague who views it as an entirely inappropriate application of pipes. However, for those of us with a UNIX background, using pipes to string together anything and everything is a completely legitimate thing to do – pipes don’t cease to work in the presence of Base R commands.

So there is room at the family table for all graphics packages. No need to bicker about the differences which we should learn to appreciate and accept as strengths. None are perfect and some are younger than others but the wisdom of the older siblings (and parents) should not be hastily discarded as things tend to recycle. To wit – I never though I would see pipes in R but I’m glad it happened. And hey ! I didn’t even get into talking about the lattice package but I have a friend who uses nothing else and is amazingly productive with it).