With the NBA playoffs going on, I’ve been thinking about the following question:

A and B are about to play a game. We know that among all players, A has rank/seed

and B has rank/seed

. (A higher ranking/seeding corresponds to a smaller value of

being the best. Players with higher rank/seed are better players.) Knowing only these two ranks, what is a reasonable model for the probability that the higher seed wins the game?

On one hand, if the probability is always 0.5, it means that ranking is uninformative: the result of the game is like an unbiased coin flip. On the other hand, if the probability is 1, it means that ranking is perfectly informative: a higher-ranked player will always beat a lower-ranked player. Reality is probably somewhere in between.

Of course, there is no single correct answer for this. The answer could also vary greatly across sports and games, and within a single sport it could also vary from league to league. The idea is just to come up with something that can approximate reality somewhat closely.

Unfortunately I will not have an answer for this question in this post. I will, however, show you some data that I scraped for the NBA playoffs and some interesting data visualizations.

There are two conferences in the NBA. At the end of the regular season, the top 8 teams in each conference make it to the playoff round where they play best-of-7 series to determine who advances. The teams are ranked within each conference according to their win-loss records in the regular season. The image below is the playoff bracket for the 2019-2020 season, giving you an idea of how a team’s seeding affects which opponents it will face in different playoff rounds.

My initial idea was the following: scrape NBA playoff data, keeping track of how many times seed

, as well as how many times seed

won. This could be the raw data we use to estimate/model the win probabilities.

Since the seedings only make sense within each conference, for each playoff year, I excluded the NBA final (where the winner of each conference faces the other). I was fortunate to find that Land of BasketBall.com presents the information I need in a systematic manner, making it easy to scrape. The R scraping script and RDS data files I saved are available here.

Determining how many years of playoff data should go into my dataset was a surprisingly difficult question. See this wikipedia section for a full history of the NBA playoff format. I was surprised to find out that ranking by win-loss record within each conference was only instituted from the 2016 playoffs onwards. There were more complicated seeding rules before that, meaning that teams could have higher rank than other teams which had better win-loss records than them. Thus, if I wanted ranking to be as pure as possible, I could only use data from 2016-2020 (the latest playoffs with data at time of writing). As you will see in the rest of this post, this is not enough data to do good estimation. On the other hand, going back further means that the idea of ranking could be diluted.

Let’s have a look at the raw data:

Each row corresponds to one best-of-7 series. Let’s add some more columns that will be useful:

In this first plot, we plot the number of series played between each pair of seeds (we always order the seeds so that the higher seed is first/on the x-axis). 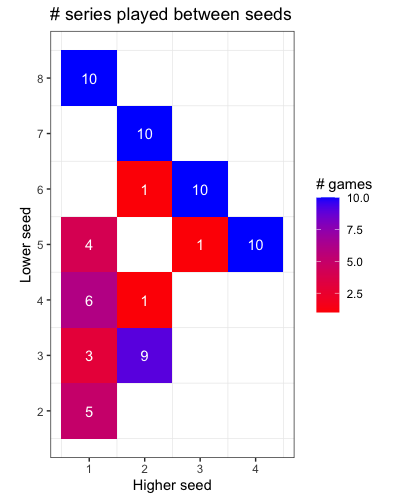 Note that the x-axis starts with the first seed while the y-axis starts with the second seed, since the first seed can never be the lower seed in any matchup. We also won’t have any data in the bottom-right half of the plot since we always put the higher seed on the x-axis. Notice that we always have 10 matches between seeds 1-8, 2-7, 3-6 and 4-5: these are the first round matchups that will always happen. Notice also that some matches have never happened (e.g. 3-4, and anything involving two of 5, 6, 7 and 8).

Next, we plot the number of games played between each pair of seeds:

From these numbers, it is clear that we won’t be able to get good estimates for the win probability between pairs of seeds due to small sample size, except possibly for the 1-8, 2-7, 3-6, 4-5 and 2-3 matchups.

Next, let’s look at the win percentage for the higher seed in each pair: 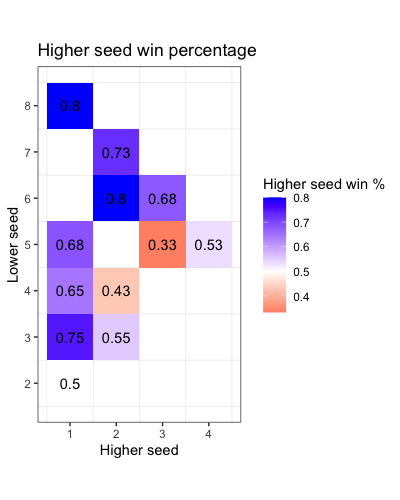 We shouldn’t give these numbers too much credence because of the small sample size, but there are a couple of things of note:

I would have expected a win probability diagram that looked more like this:

Having seen the data, what might you do next in trying to answer my original question?