Quantile regression: what is it?

be some response variable of interest, and let

be a vector of features or predictors that we want to use to model the response. In linear regression, we are trying to estimate the conditional mean function,

, by a linear combination of the features.

While the conditional mean function is often what we want to model, sometimes we may want to model something else. On a recent episode of the Linear Digressions podcast, Katie and Ben talked about a situation in Uber where it might make sense to model a conditional quantile function.

Let’s make this more concrete. Say Uber came up with a new algorithm for dispatching drivers and we are interested in how this algorithm fares in terms of wait times for consumers. A simple (linear regression) model for this is

if the new algorithm was used to dispatch a driver, and

if the previous algorithm was used. From this model, we can say that under the old algorithm, mean wait time was

, but under the new algorithm, mean wait time is

, I would infer that my new algorithm is “doing better”.

But is it really? What if the new algorithm improves wait times for 90% of customers by 1 min, but makes the wait times for the remaining 10% longer by 5 min? Overall, I would see a decrease in mean wait time, but things got significantly worse for a segment of my population. What if that 10% whose wait times became 5 minutes longer were already having the longest wait times to begin with? That seems like a bad situation to have, but our earlier model would not pick it up.

One way to pick up such situations is to model conditional quantile functions instead. That is, trying to estimate the mean of

, let’s trying to estimate a quantile of

. In our example above, instead of trying to estimate the mean wait time, we could estimate the 95th quantile wait time to catch anything going wrong out in the tails of the distribution.

Another example where estimating conditional quantiles is useful is in growth charts. All of you have probably seen one of these charts below in a doctor’s office before. Each line in the growth chart represents some quantile for length/weight given the person’s age. We track our children’s length and weight on this chart to see if they are growing normally or not.

WHO growth chart for boys. The lines represent conditional quantile functions for different quantiles: of length given age and weight given age.

Let’s load our packages and data:

We can perform quantile regression using the rq function. We can specify a tau option which tells rq which conditional quantile we want. The default value for tau is 0.5 which corresponds to median regression. Below, we fit a quantile regression of miles per gallon vs. car weight:

Printing the fitted object to the console gives some rudimentary information on the regression fit. We can use the summary function to get more information (just like we do for the lm function):

In the table above, the lower bd and upper bd columns represent the endpoints of confidence intervals for the model coefficients. There are a number of ways for these confidence intervals to be computed; this can be specified using the seoption when invoking the summary function. The default value is se="rank", with the other options being “iid”, “nid”, “ker”, “boot” and “BLB” (type ?summary.rq for details). 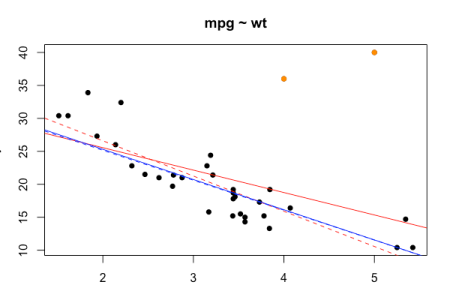 As I mentioned before, the tau option tells rq which conditional quantile we want. What is interesting is that we can set tau to be a vector and rq will give us the fits for all those quantiles:

I don’t think there’s a clean one-liner to plot all the quantile fits at once. The following loop is one possible solution:

: it gives solutions for ALL values of tau in

! (It turns out that there are a finite number of them.)