With the FIFA World Cup in my recent memory and the English Premier League (EPL) kicking off this Friday (see here for match schedules), I’ve been thinking a bit about the mathematics/statistics of the beautiful game. In this post, I want to answer the following question: Is soccer more a game of chance, or a game of skill?

Where does soccer lie on this continuum? Anyone who’s watched a game of soccer knows that (i) the team which scores more goals wins, and (ii) goals are rare! With the outcome of the game hinging on just a few events, my initial guess was that soccer might be closer to the “game of chance” end than teams would like us to believe.

At this point you might raise the question: what does it mean for a team to be better anyway? For this post, I will take a team’s ranking at the end of the season as a measure of its quality: a team with a higher ranking is deemed better than a team with a lower ranking. I will also be assuming that the team’s quality is constant throughout the season.

How do we compare this with the sliding scale of 50% win for games of chance vs. 100% for games of skill? Well… we can’t! At least not directly. There is the issue of how to deal with draws: our sliding scale assumes that the outcome of the game is either a W or an L. 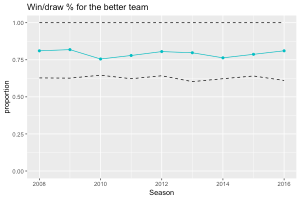 The second way to fix this issue is to do the analysis conditional on the game outcome being a win or a loss. (This is tantamount to throwing away games which end in a draw.) If we do this, then our original sliding scale (chance 50% skill 100%) applies. The figure shows the results of the conditional analysis:

So, is soccer closer to a game of chance or a game of skill? Draw your own conclusions!

[Note 1: This is a crude, first-pass model that does not capture more complex ideas. For example, we implicitly assume that all that matters in determining a better team’s win percentage is the fact that it is better. This is overly simplistic: a better team is going to win much more often if it is playing a vastly weaker opponent compared to playing an opponent that is just slightly weaker.]

Note 2: This analysis was done with just EPL data. It would be interesting to see if we get similar results for leagues in other countries.]