[This article was first published on R – On unicorns and genes, and kindly contributed to R-bloggers]. (You can report issue about the content on this page here) Want to share your content on R-bloggers? click here if you have a blog, or here if you don't.
ShareTweet

Another interesting thing that an R course participant identified: Sometimes one wants to make a function that returns multiple layers to be added to a ggplot2 plot. One could think that just adding them and returning would work, but it doesn’t. I think it has to do with how + is evaluated. There are a few workarounds that achieve similar results and may save typing.

First, some data to play with: this is a built-in dataset of chickens growing:

This is just an example that shows the phenomenon. The first two functions will work, but combining them won’t. 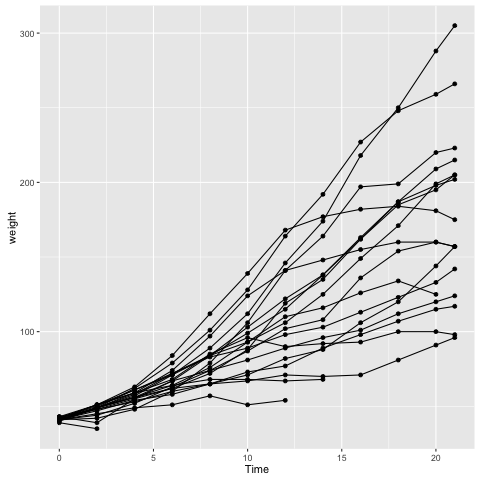 First, you can get the same result by putting mappings and data in the ggplot function. This will work if all layers are going to plot the same data, but that does it for some cases:

One way is to write a function that takes the plot object as input, and returns a modified version of it. If we use the pipe operator %>%, found in the magrittr package, it even gets a ggplot2 like feel:

Finally, in many cases, one can stick all the data in a combined data frame, and avoid building up the plot from different data frames altogether. 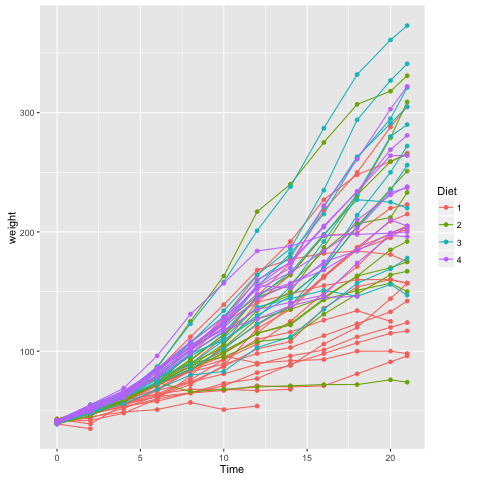 Okay, maybe that plot is a bit too busy to be good. But note how the difference between plotting a single diet and all diets at the same time one more mapping in aes(). No looping or custom functions required.

I hope that was of some use.

ShareTweet
To leave a comment for the author, please follow the link and comment on their blog: R – On unicorns and genes.
R-bloggers.com offers daily e-mail updates about R news and tutorials about learning R and many other topics. Click here if you're looking to post or find an R/data-science job. Want to share your content on R-bloggers? click here if you have a blog, or here if you don't.