[This article was first published on (R)very Day, and kindly contributed to R-bloggers]. (You can report issue about the content on this page here) Want to share your content on R-bloggers? click here if you have a blog, or here if you don't.
ShareTweet

I work a lot with Pivot Tables in Microsoft Excel. A problem I often encounter is trying to analyze a spreadsheet in which data from a single variable has been spread out over many columns. In particular, this happens rather frequently with longitudinal data.

If you are trying to look at data spread out across multiple years, it can be difficult to use a Pivot Table when each year has a designated column. What you want instead is to have a single column with the header “Year” and all of the data placed in the adjacent column as a “Values” column. Let me show you what I mean…

Let’s take this data set showing the population of all countries between 1980 and 2010, taken from data.gov, and try to look at it within a pivot table.

Here’s what the raw data looks like (I added the “country” header” for simplicity):

In Excel, you can easily make a simple graph using the data as it’s currently displayed. However, if you want to drop it into a pivot table for dynamic filtering, analysis, and visualization, it can get tricky. To include all the data in your Pivot Table, you have to drop each year individually into the “values” field of the pivot table. Then, if you want to exclude any of the years, you’ll have to manually remove them. This can be extremely time consuming, and it prevents you from performing many of the calculations available in the pivot table (i.e. “year over year percentage change”). 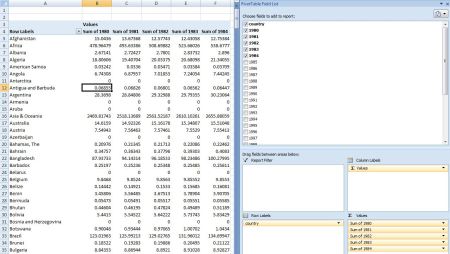 After you import and load the tidyr package, simply import the file and give the column of countries a name. Then, use the gather() function to pull all of those columns into a single column with adjacent values.

After we send the file back to our computer with write.csv, we can open the file up in Excel to see how it looks.

Now, the spreadsheet is going to list every country’s population for 1980, then 1981, then 1982, and so on. In general, this is how you want your raw data to look. If, however, you want the high level summary you started with, you can split the data back into multiple columns with tidyr’s spread() function. But, for now, let’s see how this looks in a pivot table…

If you look at the pivot table “Values” field, you’ll see that it’s a lot less messy. Now, you can manipulate the data much more easily. Want to create a pivot chart showing the increase in population within North America from 1980 to 2010? You can now do this in just a few seconds… 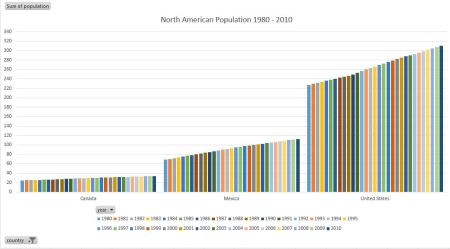 ShareTweet
To leave a comment for the author, please follow the link and comment on their blog: (R)very Day.
R-bloggers.com offers daily e-mail updates about R news and tutorials about learning R and many other topics. Click here if you're looking to post or find an R/data-science job. Want to share your content on R-bloggers? click here if you have a blog, or here if you don't.