[This article was first published on Stable Markets » R, and kindly contributed to R-bloggers]. (You can report issue about the content on this page here) Want to share your content on R-bloggers? click here if you have a blog, or here if you don't.
ShareTweet

The NYPD provides publicly available data on stop and frisks with data dictionaries, located here. The data, ranging from 2003 to 2014, contains information on over 4.5 million stops. Several variables such as the age, sex, and race of the person stopped are included.

I wrote some R code to clean and compile the data into a single .RData file. The code and clean data set are available in my Github repository.

Here are some preliminary descriptive statistics: 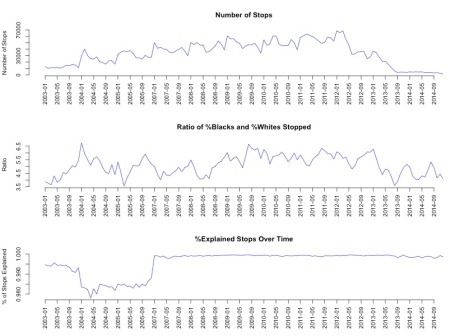 The data shows some interesting trends:

A few notes on the data:

The coding for this was particularly interesting because I had never used R to download ZIP files from the web. I reproduced this portion of the code below. It produces one dataset for each year from 2013 to 2014.

ShareTweet
To leave a comment for the author, please follow the link and comment on their blog: Stable Markets » R.
R-bloggers.com offers daily e-mail updates about R news and tutorials about learning R and many other topics. Click here if you're looking to post or find an R/data-science job. Want to share your content on R-bloggers? click here if you have a blog, or here if you don't.