I’m expanding the coverage of my article, The Popularity of Data Analysis Software. This is the first installment, which includes a new opening and a greatly expanded analysis of the analytics job market. Here it is, from the abstract onward through the first section…

These packages are all included in the first section on jobs, but later sections are older (each contains a date) and do not cover an as extensive set of software. I’ll add those as I can and announce the changes on Twitter where you can follow me as @BobMuenchen.

When choosing tool for data analysis, now more broadly referred to as analytics, there are many factors to consider. Does it run natively on your computer? Does the software provide all the methods you use? If not, how extensible is it? Does that extensibility use its own language, or an external one (e.g. Python, R) that is commonly accessible from many packages? Does it fully support the style (programming vs. point-and-click) that you like? Are its visualization options (e.g. static vs. interactive) adequate for your problems? Does it provide output the form you prefer (e.g. cut & paste into a word processor vs. LaTeX integration)? Does it handle large enough data sets?  Do your colleagues use it so you can easily share data and programs? Can you afford it?

There are many ways to measure popularity or market share and each has its advantages and disadvatages. Here they are, in approximate order of usefulness:

One of the best ways to measure the popularity or market share of software for analytics is to count the number of job advertisements for each. Indeed.com is the biggest job site in the U.S. making its sample the most representative of the current job market. As their  CEO and co-founder Paul Forster stated, Indeed.com includes “all the jobs from over 1,000 unique sources, comprising the major job boards – Monster, Careerbuilder, Hotjobs, Craigslist – as well as hundreds of newspapers, associations, and company websites.” To demonstrate just how dominant its lead is, a search for SPSS (on 2/19/14) showed more than ten times as many jobs on Indeed.com as on its well-known competitor, Monster.com. Indeed.com also has superb search capabilities and it even includes a tool for tracking long-term trends.

Searching for analytics jobs using Indeed.com can be easy, but it can also be very tricky. For many of the analytics software that required only a simple search on its name. However, for software that’s hard to locate (e.g. R) or that is general purpose (e.g. Java) it required complex searches and/or some rather tricky calculations which are described here. All of the graphs in this section use those procedures to make the required queries.

Figure 1a shows that Java and SAS are in a league of their own, with around 50% more analytics jobs than Python or C, C++/C# and twice as much as R. (The three aforementioned C variants are combined in a single search since job advertisements usually seek any of them). Python and C/C++/C#  come next at an almost identical level of popularity. That’s not too surprising as many advertisements for analytics jobs that use programming mention both together. 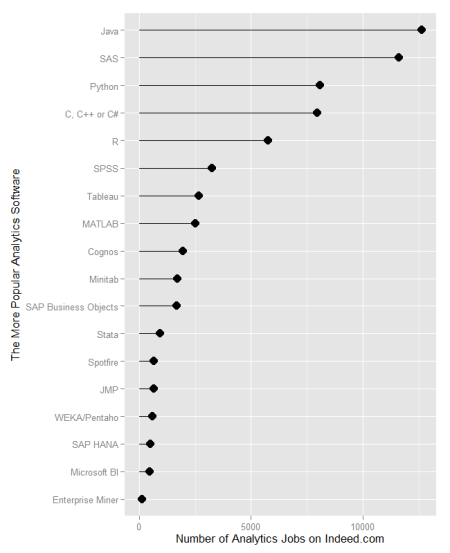 Figure 1a. The number of analytics jobs for the more popular software (2/2014).

R resides in an interestingly large gap between the other domain-specific languages, SAS and SPSS. This is the first estimate I’ve done that shows that the job market for R has not only caught up with SPSS, but surpassed it by close to double the number of job postings. I knew my previous estimates for R jobs was low, but I had not yet thought of a better way to estimate the total. From SPSS on down, there’s a smooth decline. Enterprise Miner is the only data-mining-specific software to make the cutoff of at least 100 jobs. If I plotted all the software below that point, they would all pile up on the y-axis, appearing to have almost no jobs. Relatively speaking, they don’t!

It’s important to note that the values shown in Figure 1a are single points in time. The number of jobs for the more popular software do not change much from day to day, but each software has an overall trend that shows how the demand for jobs changes across the years. You can plot such trends using Indeed.com’s Job Trends tool. However, as before, focusing just on analytics jobs requires carefully constructed queries, and when comparing two trends at a time means they both have to fit in the same query limit allowed by Indeed.com. Those details are described here.

I’m particularly interested in trends involving R, so let’s look at a couple of comparisons. Figure 1b compares the number of analytics jobs available for R and SPSS across time. Analytics jobs for SPSS have not changed much over the years, while those for R have been steadily increasing. The jobs for R finally crossed over and exceeded those for SPSS toward the middle of 2012. 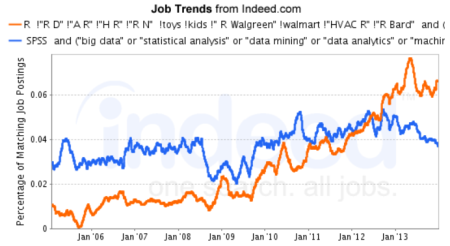 Figure 1b. Analytics job trends for R and SPSS. Note that the legend labels are truncated due to the very long size of the query.

We know from Figure 1a that SAS is still far ahead of R in analytics job postings. How far does R have to go to catch up with SAS? Figure 1c provides one perspective. It would be nice to have the data to forecast when R’s growth curve will catch up with SAS’, but Indeed.com does not provide the raw data. However, we can use the approximate slope of each line to get a rough estimate. If jobs for SAS stay level and those for R continue to grow linearly as they have since January 2010, then R will catch up in 3.35 years. If instead the demand for SAS jobs that started in January of 2012 continues, then R will catch up in 1.87 years. 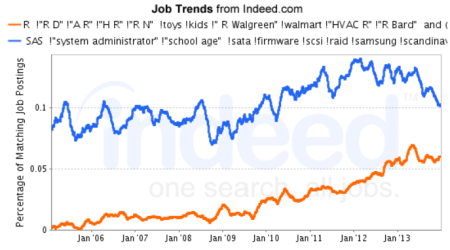 A debate has been taking place on the Internet regarding the relative place of Python and R. Ironically, this debate about softare to do data analytics has involved very little actual data. However it is possible now to at least study the job trends. Figure 1a showed us that Python is well out in front of R, at least on that single day the searches were run. What has the data looked like over time? The answer is in Figure 1d. 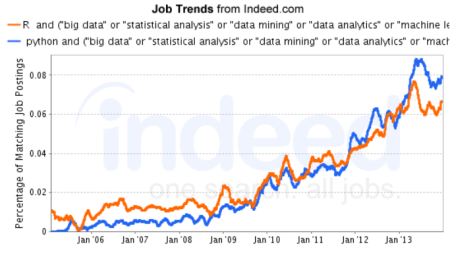 Note that in this graph, Python appears to have a relatively slight advantage while in Figure 1a it had a huge one. The final point on the trend graph was done only two days after the queries used in Figure 1a, and that data changed very little in the meantime. The difference is due to the fact that Indeed.com has a limit on query length. Here is the query used for Figure 1c, and the analytic terms it contains were fewer than the one used for Figure 1a.

The detailed description regarding the construction of all the queries used in Figures 1a through 1c is located here.

At this point, the rest of The Popularity of Data Analysis Software will continue, offering many additional perspectives on measuring analytics market share. However, until I update those sections in the coming months, they will not cover as broad a range of software. Stay tuned on Twitter, by following @BobMuenchen.

If you know SAS, SPSS or Stata and have not yet learned R, you can join me for this web-based workshop aimed at translating your knowledge into R. The next workshop begins on April 21. If you do know R and would like to learn more, you might enjoy taking Managing Data with R. The next time I’m offering that is on April 25.