[This article was first published on Thiago G. Martins » R, and kindly contributed to R-bloggers]. (You can report issue about the content on this page here) Want to share your content on R-bloggers? click here if you have a blog, or here if you don't.
ShareTweet

As I have described before, Linear Discriminant Analysis (LDA) can be seen from two different angles. The first classify a given sample of predictors

. It minimizes the total probability of misclassification. To compute

it uses Bayes’ rule and assume that

. The second tries to find a linear combination of the predictors that gives maximum separation between the centers of the data while at the same time minimizing the variation within each group of data.

The second approach [1] is usually preferred in practice due to its dimension-reduction property and is implemented in many R packages, as in the lda function of the MASS package for example. In what follows, I will show how to use the lda function and visually illustrate the difference between Principal Component Analysis (PCA) and LDA when applied to the same dataset.

As usual, we are going to illustrate lda using the iris dataset. The data contains four continuous variables which correspond to physical measures of flowers and a categorical variable describing the flowers’ species.

An usual call to lda contains formula, data and prior arguments [2].

The . in the formula argument means that we use all the remaining variables in data as covariates. The prior argument sets the prior probabilities of class membership. If unspecified, the class proportions for the training set are used. If present, the probabilities should be specified in the order of the factor levels.

of the between-group variance in the iris dataset.

If we call lda with CV = TRUE it uses a leave-one-out cross-validation and returns a named list with components:

There is also a predict method implemented for lda objects. It returns the classification and the posterior probabilities of the new data based on the Linear Discriminant model. Below, I use half of the dataset to train the model and the other half is used for predictions.

Visualizing the difference between PCA and LDA

As I have mentioned at the end of my post about Reduced-rank DA, PCA is an unsupervised learning technique (don’t use class information) while LDA is a supervised technique (uses class information), but both provide the possibility of dimensionality reduction, which is very useful for visualization. Therefore we would expect (by definition) LDA to provide better data separation when compared to PCA, and this is exactly what we see at the Figure below when both LDA (upper panel) and PCA (lower panel) are applied to the iris dataset. The code to generate this Figure is available on github. 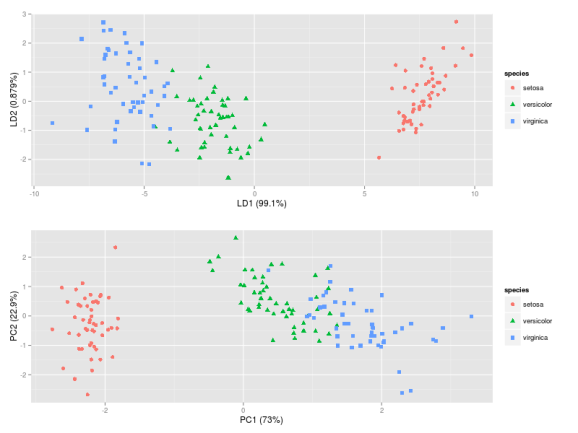 Although we can see that this is an easy dataset to work with, it allow us to clearly see that the versicolor specie is well separated from the virginica one in the upper panel while there is still some overlap between them in the lower panel. This kind of difference is to be expected since PCA tries to retain most of the variability in the data while LDA tries to retain most of the between-class variance in the data. Note also that in this example the first LD explains more than

of the total variability in the data.

Although I have not applied it on my illustrative example above, pre-processing [3] of the data is important for the application of LDA. Users should transform, center and scale the data prior to the application of LDA. It is also useful to remove near-zero variance predictors (almost constant predictors across units). Given that we need to invert the covariance matrix, it is necessary to have less predictors than samples. Attention is therefore needed when using cross-validation.

ShareTweet
To leave a comment for the author, please follow the link and comment on their blog: Thiago G. Martins » R.
R-bloggers.com offers daily e-mail updates about R news and tutorials about learning R and many other topics. Click here if you're looking to post or find an R/data-science job. Want to share your content on R-bloggers? click here if you have a blog, or here if you don't.