[This article was first published on DiffusePrioR » R, and kindly contributed to R-bloggers]. (You can report issue about the content on this page here) Want to share your content on R-bloggers? click here if you have a blog, or here if you don't.
ShareTweet 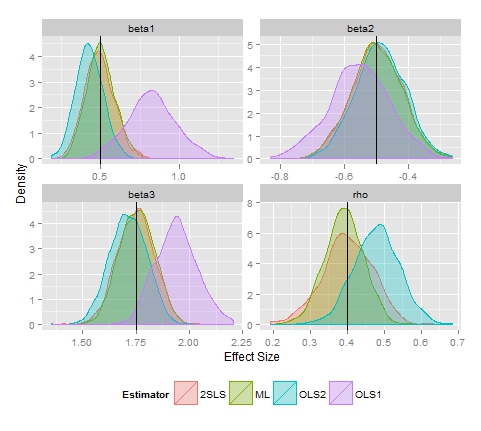 Over the past number of years, I have noted that spatial econometric methods have been gaining popularity. This is a welcome trend in my opinion, as the spatial structure of data is something that should be explicitly included in the empirical modelling procedure. Omitting spatial effects assumes that the location co-ordinates for observations are unrelated to the observable characteristics that the researcher is trying to model. Not a good assumption, particularly in empirical macroeconomics where the unit of observation is typically countries or regions.

Starting out with the prototypical linear regression model:

, we can modify this equation in a number of ways to account for the spatial structure of the data. In this blog post, I will concentrate on the spatial lag model. I intend to examine spatial error models in a future blog post.

The spatial lag model is of the form:

measures the potential spill-over effect that occurs in the outcome variable if this outcome is influenced by other unit’s outcomes, where the location or distance to other observations is a factor in for this spill-over. In other words, the neighbours for each observation have greater (or in some cases less) influence to what happens to that observation, independent of the other explanatory variables

matrix is a matrix of spatial weights, and the

parameter measures the degree of spatial correlation. The value of

is zero, the spatial lag model collapses to the prototypical linear regression model.

matrix, where the diagonal consists of 3 zeros (you are not a neighbour with yourself). Typically, this matrix will also be symmetric. It is also at the user’s discretion to choose the weights in

. Common schemes include nearest k neighbours (where k is again at the users discretion), inverse-distance, and other schemes based on spatial contiguities. Row-standardization is usually performed, such that all the row elements in

While the spatial-lag model represents a modified version of the basic linear regression model, estimation via OLS is problematic because the spatially lagged variable

is endogenous. The endogeneity results from what Charles Manski calls the ‘reflection problem’: your neighbours influence you, but you also influence your neighbours. This feedback effect results in simultaneity which renders bias on the OLS estimate of the spatial lag term. A further problem presents itself when the independent variables

are themselves spatially correlated. In this case, completely omitting the spatial lag from the model specification will bias the

Fortunately, remedying these biases is relatively simple, as a number of estimators exist that will yield an unbiased estimate of the spatial lag, and consequently the coefficients for the other explanatory variables—assuming, of course, that these explanatory variables are themselves exogenous. Here, I will consider two: the Maximum Likelihood estimator (denoted ML) as described in Ord (1975), and a generalized two-stage least squares regression model (2SLS) wherein spatial lags, and spatial lags lags (i.e.

) of the explanatory variables are used as instruments for

. Alongside these two models, I also estimate the misspecified OLS both without (OLS1) and with (OLS2) the spatially lagged dependent variable.

To examine the properties of these four estimators, I run a Monte Carlo experiment. First, let us assume that we have 225 observations equally spread over a

lattice grid. Second, we assume that neighbours are defined by what is known as the Rook contiguity, so a neighbour exists if they are in the grid space either above or below or on either side. Once we create the spatial weight matrix we row-standardize.

Taking our spatial weights matrix as defined, we want to simulate the following linear model:

. The explanatory variables are themselves spatially autocorrelated, so our simulation procedure first simulates a random normal variable for both

, then assuming a autocorrelation parameter of

, generates both variables such that:

. In the next step we simulate the error term

. We introduce endogeneity into the spatial lag by assuming that the error term

is a function of a random normal

, and that the spatial lag term includes

. We modify the regression model to incorporate this:

. From this we can calculate the reduced form model:

, and simulate values for our dependent variable

is in the bottom-right quadrant. As we can see, the OLS model that includes the spatial effect but does not account for simultaneity (OLS2) over-estimates the importance of spatial spill-overs. Both the ML and 2SLS estimators correctly identify the

parameter. The remaining quadrants highlight what happens to the coefficients of the explanatory variables. Clearly, the OLS1 estimator provides the worst estimate of these coefficients. Thus, it appears preferable to use OLS2, with the biased autocorrelation parameter, than the simpler OLS1 estimator. However, the OLS2 estimator also yields biased parameter estimates for the

coefficients. Furthermore, since researchers may want to know the marginal effects in spatial equilibrium (i.e. taking into account the spatial spill-over effects) the overestimated

To perform these calculations I used the spdep package in R, with the graphic created via ggplot2. Please see the R code I used in the below.

ShareTweet
To leave a comment for the author, please follow the link and comment on their blog: DiffusePrioR » R.
R-bloggers.com offers daily e-mail updates about R news and tutorials about learning R and many other topics. Click here if you're looking to post or find an R/data-science job. Want to share your content on R-bloggers? click here if you have a blog, or here if you don't.