[This article was first published on Strenge Jacke! » R, and kindly contributed to R-bloggers]. (You can report issue about the content on this page here) Want to share your content on R-bloggers? click here if you have a blog, or here if you don't.
ShareTweet

Update
I followed the advice from Tim’s comment and changed the scaling in the sjPlotOdds-function to logarithmic scaling. The screenshots below showing the plotted glm’s have been updated.

Summary
In this posting I will show how to plot results from linear and logistic regression models (lm and glm) with ggplot. As in my previous postings on ggplot, the main idea is to have a highly customizable function for representing data. You can download all my scripts from my script page.

The inspiration source
My following two functions are based on an idea which I saw at the Sustainable Research Blog. Actually, this was a kind of starting point for me to get started with R and learn more about its data visualization facilities. After playing around some time with ggplot, I built my own function based on the script posted at Sustainable Research.

Plotting odds ratios
Plotting odds ratios gives you mainly two display styles: bars or plots (dots). First, let me show you the dot-style. Assuming you have a glm-object (in my examples, it’s called logreg) and have loaded the function sjPlotOdds.R (see my script page for downloads), you can plot the results like this (I have used oddsLabels=lab , a vector with label-strings, which are used as axis-labels. If you leave out this parameter, the variable-names from the model will be taken.):

In the above example, if you do not specifiy axis limits, the boundaries will be calculated according to the lowest and highest confidence interval, thus fitting the diagram to the highest possible “zoom”. The next example demonstrates this with bar charts:

Odds ratios with confidence intervals, fitting the axes to maximum “zoom”, too.

If you dislike the grid bars to become narrower with increasing odds ratio values, you can use the transformTicks parameter, which uses exponential distances between the tick marks. This results in grid bars with (almost) equal distances. However, the tick values, of course, are accordingly set:

Linear regression, with beta-values and confidence intervals (in blue) as well as standardized beta values (in red)

As you can see, I have used predictorLabelSize=1 and breakLabelsAt=30 due to the long variable labels. By default, each label at the left axis would break into more lines, thus being narrower and worse to read. Then I used sort=”std” to sort the predictors according to their standardized beta values (default would be ordering according to the beta values). 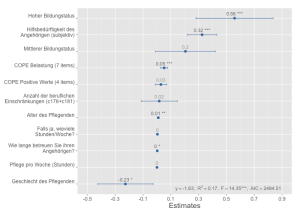 This last example shows how to hide the value labels inside the diagram, so you only have the dots for beta and standardized beta coefficients.

Last remark
In between I have also updated my other scripts. For instance, the sjPlotGroupFrequencies.R function can now also plot box plots or violin plots (see examples at the end of that posting). So make sure you have the latest version from my script page.

ShareTweet
To leave a comment for the author, please follow the link and comment on their blog: Strenge Jacke! » R.
R-bloggers.com offers daily e-mail updates about R news and tutorials about learning R and many other topics. Click here if you're looking to post or find an R/data-science job. Want to share your content on R-bloggers? click here if you have a blog, or here if you don't.