[This article was first published on The Chemical Statistician » R programming, and kindly contributed to R-bloggers]. (You can report issue about the content on this page here) Want to share your content on R-bloggers? click here if you have a blog, or here if you don't.
ShareTweet

The Structure of an Atom

An atom consists of a nucleus at the centre and electrons moving around it.  The nucleus contains a mixture of protons and neutrons.  For most purposes in chemistry, the two most important properties about these 3 types of particles are their masses and charges.  In terms of charge, protons are positive, electrons are negative, and neutrons are neutral.  A proton’s mass is roughly the same as a neutron’s mass, but a proton is almost 2,000 times heavier than an electron. 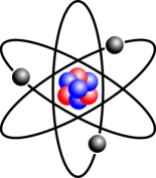 This image shows a lithium atom, which has 3 electrons, 3 protons, and 4 neutrons.

What is an Isotope?

A chemical element is defined by the number of protons in the nuclei of its atoms – this is the atomic number.  However, an element can have atoms with different numbers of neutrons in their nuclei, resulting in various “versions” of the element.  An isotope is a variant of an element based on the number of neutrons in its atoms.  The sum of the numbers of protons and neutrons of an atom is the atomic mass number, and the name of an isotope is defined by this number.

The isotopic abundances of chlorine can be displayed easily in a bar chart or a pie chart.  In R, the relevant functions are barplot() and pie().

Here is my R code for generating these charts.

ShareTweet
To leave a comment for the author, please follow the link and comment on their blog: The Chemical Statistician » R programming.
R-bloggers.com offers daily e-mail updates about R news and tutorials about learning R and many other topics. Click here if you're looking to post or find an R/data-science job. Want to share your content on R-bloggers? click here if you have a blog, or here if you don't.