There is a lot of hype in media about Ponting’s best days being behind him. While he’s rebuilding a fresh Aussie team, everyone is putting more pressure on him by comparing his performance with Tendulkar’s. Leave him alone!

We have the privilege of watching two great batsmen play in our lifetimes. They’ve both had prolific batting careers in all formats of the game (see chart below). I love watching them and hate the run and form comparison. It kills the joy of cricket. Why can’t we simply accept that they are both great players. We don’t compare Rembrant and Picasso’s work line by line, color by color, year by year? So why subject sportsmen to such comparison.

Yes, Tendulkar is playing good cricket in the last 4 years compared to how he performed in 2003, 2005 and 2006. Ricky is champion batsman and captain. He leads his team and cannot be subjected to a comparison based only on runs/centuries scored in a year. Give him some time to rebuild his team and then he can get back to his ferocious batting style (remember his assault in world cup final against India in 2003). Its only a matter of few games and he’ll be back in form soon. World Cups bring out the best in him, so just wait and watch! 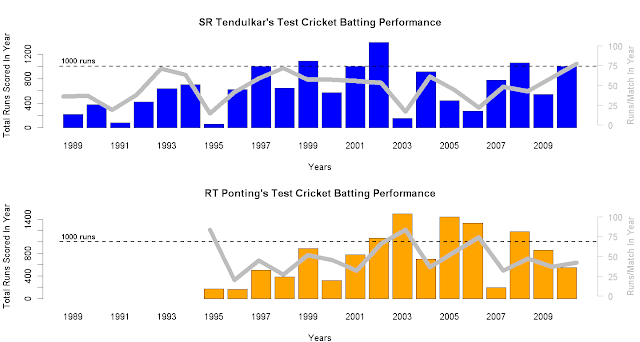 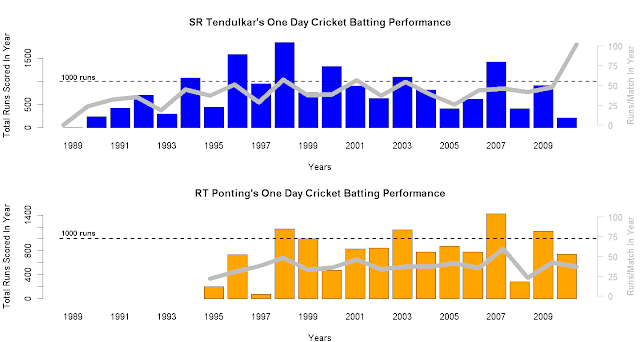 Here’s the code to generate the bar graphs showing Tendulkar’s and Ponting’s Total Runs/Year and Runs/Match that Year.