[This article was first published on R – Win Vector LLC, and kindly contributed to R-bloggers]. (You can report issue about the content on this page here) Want to share your content on R-bloggers? click here if you have a blog, or here if you don't.
ShareTweet

In a previous article we discussed why it’s a good idea to prefer probability models to “hard” classification models, and why you should delay setting “hard” classification rules as long as possible. But decisions have to be made, and eventually you will have to set that threshold. How do you do it?

A good threshold balances classifier precision/recall or sensitivity/specificity in a way that best meets the project or business needs. One way to quantify and think about this balance is the notion of model utility, which maps the performance of a model to some notion of the value achieved by that performance. In this article, we demonstrate the use of sigr::model_utility() to estimate model utility and pick model thresholds for classification problems.

Let’s imagine that we have a sales application, and we are trying to decide which prospects to target. We want to build a model that predicts the probability of conversion, based on certain prospect characteristics.

For our example, suppose we have a population where true positives are relatively rare (about 1% of the population), and we have trained a model that returns predictions like this on an evaluation set, d:

(For the data generation code, see the source code for this article).

We want to contact prospects with a higher probability of converting; that is, prospects who score above a certain threshold. How how do we set that threshold?

Note that the usual default threshold of 0.5 will fail spectacularly with this model, since both positive and negative examples score quite low. This is not uncommon in low positive prevalence situations.

Picking a threshold based on model performance

We might try picking the threshold by looking at model performance. Let’s look at precision (the probability that a sample scored as “true” really is true) and recall (the fraction of conversions found) as a function of threshold.

For the sake of efficiency, we’d like to reduce the number of unsuccessful calls as much as possible, which implies we’d like a decision policy with high precision. The best precision we can get with this model occurs at a threshold of around 0.034 or 0.035 or so, and at that point the recall is quite low. Is that classifier good enough for our business needs? This can be hard to tell, as the business needs are likely in dollars, rather than in false positive/false negatives, and so on.

Picking a threshold based on model utility

The way to decide if a possible threshold meets business needs is to attach utilities to the decisions – right and wrong – that the model will make. To do this, we need to assign costs and rewards to contacting (or not contacting) a prospect.

Suppose every contact we make costs $5, and every successful conversion brings in $100 in net revenue. For demonstration purposes, we will also add a small penalty for every missed prospect (one penny), and a small reward for every prospect we correctly ignore (again, one penny). Let’s add those costs to our model frame. (You can leave the last two values at zero, if you prefer).

As we vary the decision threshold, we vary the number of prospects contacted, and the number of successful conversions. We can use the costs and rewards above to calculate the total value (or the total utility) realized by a decision policy over the evaluation set. The threshold that realizes the highest utility is the best threshold to use with a given model (for now, we ignore also modeling uncertainty).

The sigr::model_utility() function can calculate all the costs for various thresholds.

The model_utility() function returns a data frame with the following columns (with one example row):

Each row of values returns the appropriate counts and values for a classifier rule that labels cases as TRUE when predicted_probability >= threshold. Now we can determine the total value returned by the model on our evaluation set, as a function of threshold. 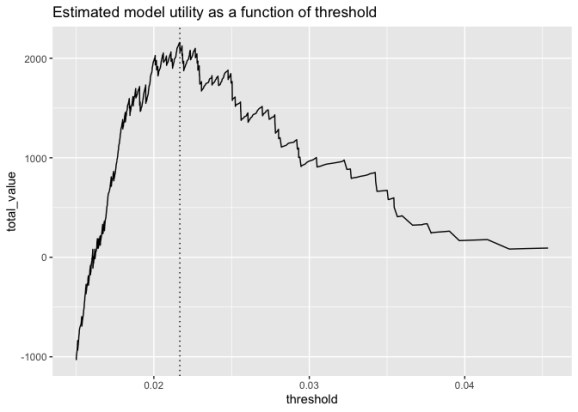 The graph shows that a policy that contacts too many prospects (lower threshold) will lose money (negative utility), while contacting too few prospects (higher threshold) goes to zero utility. The best tradeoff with this model is a threshold of 0.022, which translates to contacting the top 4.27% of the prospects.

If we go back to the precision/recall graph, we see that this optimal threshold actually doesn’t give us the policy with the highest precision, but it makes up for that by making more successful contacts. Picking the threshold from the utility calculation is easier and more reliable than just eyeballing a threshold from the abstract recall/precision graph.

We can compare this model’s optimal policy to the best possible performance on this data (contacting all of the successful prospects, and only them), simply by positing a “wizard model” that scores true cases as 1.0 and false cases as 0.0. In this case any threshold between zero and one (say, 0.5) will perform the same. For this situation, the model_utility function will return three rows: one for the policy of contacting everyone (threshold = 0), one for threshold = 0.5, and one for the policy of contacting no one (marked as threshold = NA).

In the above example, we assigned constant utilities and costs to the data set. Here, instead of assuming a fixed revenue of $100 dollars on conversions, we’ll assume that projected potential revenue varies by prospect (with an average of $100). This potential value could be contract sizes that we are bidding on, which varies from prospect to prospect.

Here we replot the utility curve. 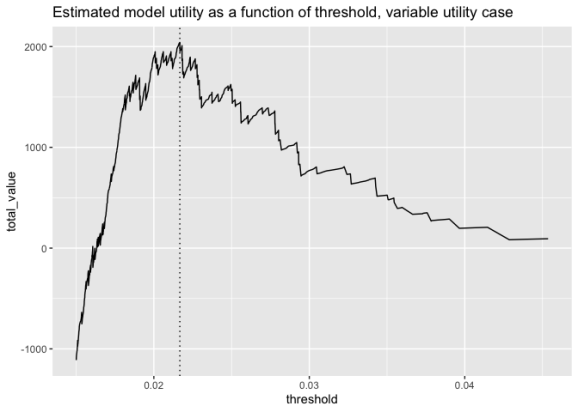 Up until now, we’ve returned point utility estimates, based on an evaluation set. We assume that this evaluation set is representative of the general population that we will be applying this model to, but of course there will be some variation. For this reason, we’d like to have an idea of the uncertainty of our utility estimates. In our next note, we will deal with estimating and reporting uncertainty.

Thinking in terms of utility is simple, because it’s already the language of your business partners. Utility estimates help you choose the best and most useful classifier rules for your probability models. Here, we’ve shown how to select a classifier threshold directly from policy utility, using sigr::model_utility().

ShareTweet
To leave a comment for the author, please follow the link and comment on their blog: R – Win Vector LLC.
R-bloggers.com offers daily e-mail updates about R news and tutorials about learning R and many other topics. Click here if you're looking to post or find an R/data-science job. Want to share your content on R-bloggers? click here if you have a blog, or here if you don't.