[This article was first published on R – Win Vector LLC, and kindly contributed to R-bloggers]. (You can report issue about the content on this page here) Want to share your content on R-bloggers? click here if you have a blog, or here if you don't.
ShareTweet

In our data science teaching, we present the ROC plot (and the area under the curve of the plot, or AUC) as a useful tool for evaluating score-based classifier models, as well as for comparing multiple such models. The ROC is informative and useful, but it’s also perhaps overly concise for a beginner. This leads to a lot of questions from the students: what does the ROC tell us about a model? Why is a bigger AUC better? What does it all mean?

We’ll start with a simple synthetic example, where score is the score produced by a trained model, and y is the actual outcome in the evaluation data set (TRUE or FALSE). We’ll assume for this discussion that the model score is a number in the unit interval, as would be true for a probability model.

Here’s the ROC, and its associated AUC: 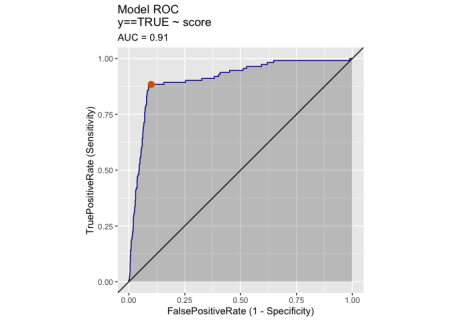 To make the information in the ROC more explicit, let’s plot the true positive rates and false positive rates off all possible classification rules as a function of threshold. We can do this with the ThresholdPlot() function from the WVPlots package. 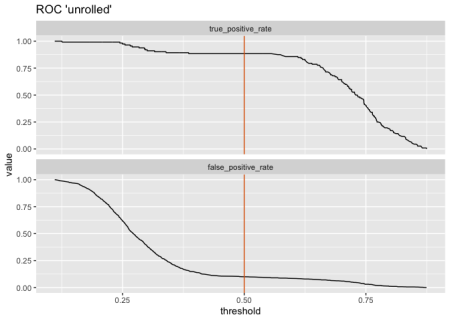 The threshold plot and the ROC give us the exact same tradeoff information. While the ROC and the AUC are more convenient for comparing multiple scoring models, the threshold plot makes the relationship of performance to threshold value explicit. This can be useful if you are willing to tweak the threshold to make a tradeoff. For example, if avoiding false positives is more important to you than catching all the positive instances, you could try a stricter threshold like 0.75. In this case, the classifier would make fewer false positive errors, but it would also detect far fewer positive examples, as well.

Some Strawman Models for Intuition 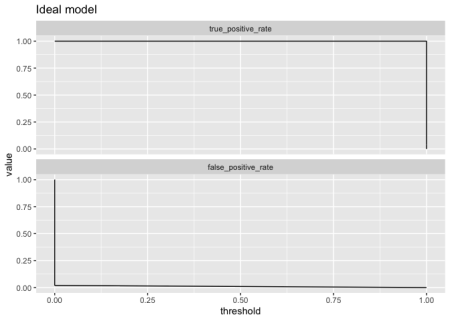 (The endpoints are convention). With an ideal model, any threshold except exactly zero or one produces a classification rule with a true positive rate of one and and a false positive rate of zero. This traces out an ROC that’s exactly the unit square: 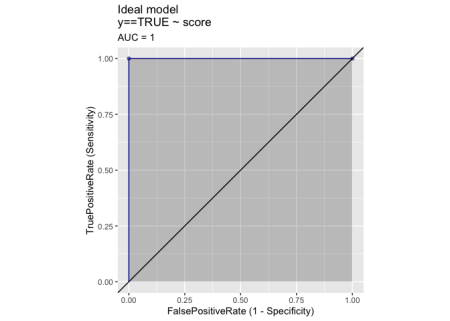 What about a model that doesn’t predict anything at all, but just returns random answers? 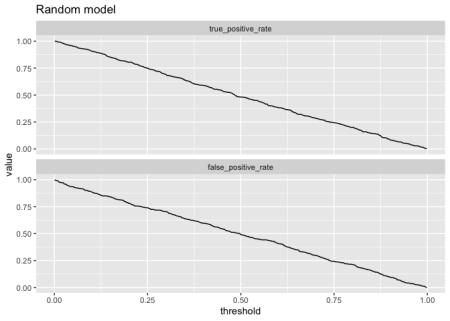 Both the true and false positive rates are proportional to the threshold, and the ROC will be close to the line x = y. 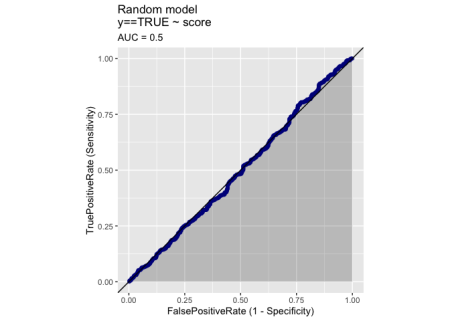 A random model has an AUC near 0.5. And a model that has an ROC that dips below the line x = y (and has an AUC less than 0.5) is actually anticorrelated with the true class labels.

The ROC and Class Prevalence

It’s worth noting that the ROC depends on the false positive rate (the rate at which negatives are misclassified as positives) and true positive rate (the rate at which positives are correctly classified), neither of which depends on class prevalence. That means that the ROC is independent of class prevalence. In other words, it can look overly optimistic when the target class is rare.

To demonstrate, let’s look at two situations that have been designed to produce the same ROC (for the code to generate this example, see the R markdown for this article). The first situation is a model applied to a balanced-class population; the second is a model applied where the positive class is relatively rare (about 20%). 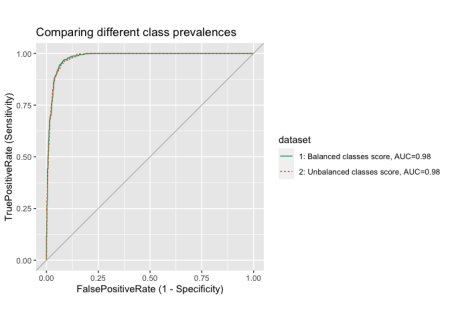 As designed, the ROC is nearly identical in both situations, with a high AUC. These both look like good models.

But suppose instead of false positive rate, you are worried about precision (the probability that a instance predicted to be positive is actually positive). With respect to precision, the two models behave quite differently. 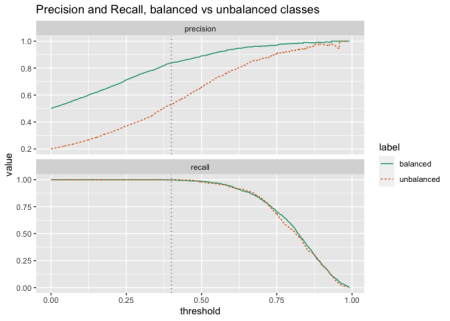 Both models have identical recall (which is the same as true positive rate, and is independent of class prevalence), but the model that is applied to a population where the positive class is rare will have much lower precision for any useful setting of the classifier threshold.

These sort of details are easier to work through with tools that expose tradeoff management, like ThresholdPlot, rather than only examining the ROC.

Let’s Sum It All Up

What have we established in this article?

Hopefully, you now have a better intuition about the ROC, and what it means.

ShareTweet
To leave a comment for the author, please follow the link and comment on their blog: R – Win Vector LLC.
R-bloggers.com offers daily e-mail updates about R news and tutorials about learning R and many other topics. Click here if you're looking to post or find an R/data-science job. Want to share your content on R-bloggers? click here if you have a blog, or here if you don't.