Principal component analysis (PCA) is a dimensionality reduction technique which might come handy when building a predictive model or in the exploratory phase of your data analysis. It is often the case that when it is most handy you might have forgot it exists but let’s neglect this aspect for now 😉 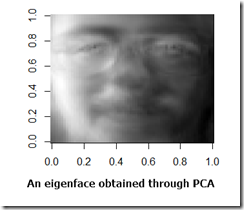 I decided to write this post mainly for two reasons:

What does it do?

PCA looks for a new the reference system to describe your data. This new reference system is designed in such a way to maximize the variance of the data across the new axis. The first principal component accounts for as much variance as possible, as does the second and so on. PCA transforms a set of (tipically) correlated variables into a set of uncorrelated variables called principal components. By design, each principal component will account for as much variance as possible. The hope is that a fewer number of PCs can be used to summarise the whole dataset. Note that PCs are a linear combination of the original data.

The procedure simply boils down to the following steps

Everything clear? No? Ok don’t worry, it takes a bit of time to sink in. Check the practical example below.

Use case: why should you use it?

The best use cases I can find at the top of my mind are the following:

In all these 3 cases PCA might help you getting closer to your goal of improving the results of your analysis.

Use case: when should you use it?

PCA is a technique used in the exploratory phase of data analysis. Personally, I would use it only in one of the 3 circumstances above, at the beginning of my analisis, after having confirmed through the basic descriptive statistics tools and some field knowledge, that I am indeed in one of the use cases mentioned. I would also probably use it when trying to improve a model that relies on independence of the variables.

Not use case: when should you not use it?

PCA is useless when your data is mostly indipendent or even when you have very few variables I would argue. Personally, I would not use it when a clean and direct interpretation of the model is required either. PCA is not a black box but its output is difficult to a) explain to non technical people and, in general, b) not easy to interpret.

The Olivetti faces dataset is a collection of 64×64 greyscale pixel images of 40 faces, there are 10 images for each face. It is available in Scikit-learn and it is a good example dataset for showing what PCA can do. I think it is a better cheap example than the iris dataset since it can show you why you would use PCA.

First, we need to download the data using Python and Scikit-Learn.

Then, we need to shape the data in a way that is acceptable for our analysis, that is, features (also known as variables) should be columns, and samples (also known as observations) should be the rows. In our case the data matrix should have size 399×4096. Row 1 would represent image 1, row 2 image 2, and so on… To achieve this, I used this simple R script with a for loop

The images in the dataset are all head shots with mostly no angle. This is an example of the first face (label 0) 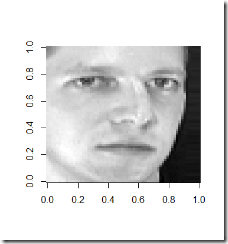 Then it is time to actually applying PCA on the dataset

Since the covariance matrix has dimensions 4096×4096 and it is real and symmetric, we get 4096 eigenvalues and 4096 corresponding eigenvectors. I decided (after a few trials) to keep only the first 20 which account roughly for 76.5 % of the total variance in the dataset. As you can see from the plot below, the magnitude of the eigenvalues goes down pretty quickly. 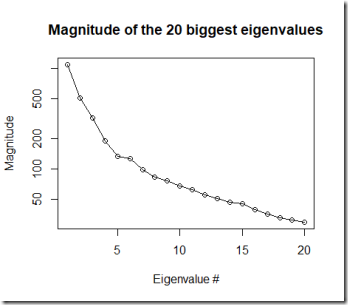 What is an eigenface? The eigenvectors of the covariance matrix are the eigenfaces of our dataset. These face images form a set of basis features that can be linearly combined to reconstruct images in the dataset. They are the basic characteristic of a face (a face contained in this dataset of course) and every face in this dataset can be considered to be a combination of these standard faces. Of course this concept can be applied also to images other than faces. Have a look at the first 4 (and the 20th) eigenfaces. Note that the 20th eigenface is a bit less detailed than the first 4. If you were to look at the 4000 eigenface, you would find that it is almost white noise. 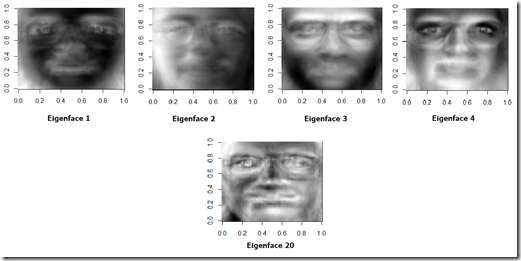 Then we can project the average face onto the eigenvector space. We can do this also for a new image and use this new data, for instance, to do a classification task.

This is the plot we obtain

As you can see, the 3 average faces rank quite differently in the eigenvectors’ space. We could use the projections of a new image to perform a classification task on an algorithm trained on a database of images transformed according to PCA. By using only a few principal components we could save computational time and speed up our face recognition (or other) algorithm.

For the first few times, I would highly suggest you to do PCA manually, as I did above, in order to get a firm grasp at what you are actually doing with your data. Then, once you are familiar with the procedure, you can simply use R built-in prcomp function (or any other that you like) which, however,  has the downside of calculating all the eigenvalues and eigenvectors and therefore can be a bit slow on a large dataset. Below you can find how it can be done.