This is a short post following the previous one (PCA revisited).

In this post I’m going to apply PCA to a toy problem: the classification of faces. Again I’ll be working on the Olivetti faces dataset. Please visit the previous post PCA revisited to read how to download it.

The goal of this post is to fit a simple classification model to predict, given an image, the label to which it belongs. I’m goint to fit two support vector machine models and then compare their accuracy.

This will not be an in-depth and detailed fit and subsequent evaluation of the model, but rather a simple proof of concept to prove that a limited number of principal components can be used to perform a classification task instead of using the actual data.

The setup of the two models

In order to get an idea of what accuracy our models can achieve, I decided to do a simple 20 fold crossvalidation  of each model.

The data model is a simple support vector machine that is fitted using all the faces in the training set: it’s input data is a vector of 4096 components.

The PCA model is again the same support vector machine (with the same hyperparameters, which however may need some tweaking) fitted using 30 PCs.

By performing PCA on the dataset I transformed the data and, according to the analysis, 30 PCs account for about 82% of the total variance in the dataset. Indeed you can see from the plots below that the first 30 eigenvalues are those with the highest magnitude. 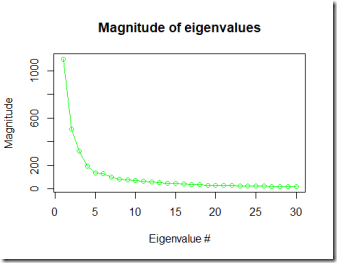 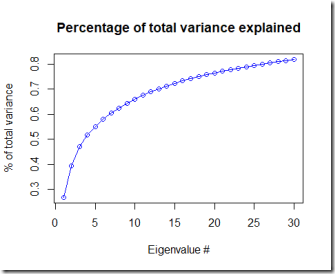 After running  the two crossvalidations on the two different models, the main results I found are the following:

The results are summarised in the boxplot below 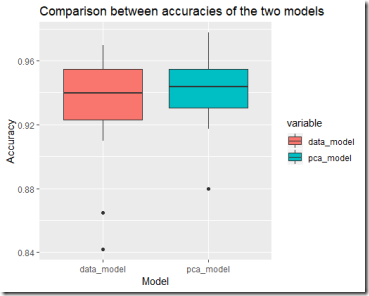 Note that the PCA model has less information available compared to the model using the original data. However, the information is condensed in a fewer variables (the 30 PCs) in a more compact way. This technique is great when you are using models sensitive to correlation in the data: since the PCs are not correlated, you can transform your original data (which might be correlated and causing problems in the model) and use the principal components instead.

The code I used is here below