[This article was first published on R – Monkeys Working, and kindly contributed to R-bloggers]. (You can report issue about the content on this page here) Want to share your content on R-bloggers? click here if you have a blog, or here if you don't.
ShareTweet

In this post we’re going to use the dataset obtained in our previous post to achieve the following goals:

The whole script, if you want to reproduce completely this post is here.

Ok, now if you’re reading this post for the first time and don’t want go back to the previous one to understand what data we are talking about, a brief summary of it is:

In our previous post we could spot some spikes in the plot of Exchange rate vs. Date.

These spikes means that some sudden changes in the price of the reference currency occurred. But now, how can we measure these changes?

Analyzing our data with a custom function in R

The first idea that comes into mind is to measure a percentage change from one day to another in the price of the USD. So, this Daily Percentage Change (DPC) could give us an idea of how sudden a change in the price is. The higher the number, the higher the daily variation.
So we need to compute the following for every pair of values in our dataset:

is the price in the day i and

is the price in the day after.

We wrote the following R code that gives us the function to calculate the DPC using our dataset.

The next thing to do is to run our function and plot the results: 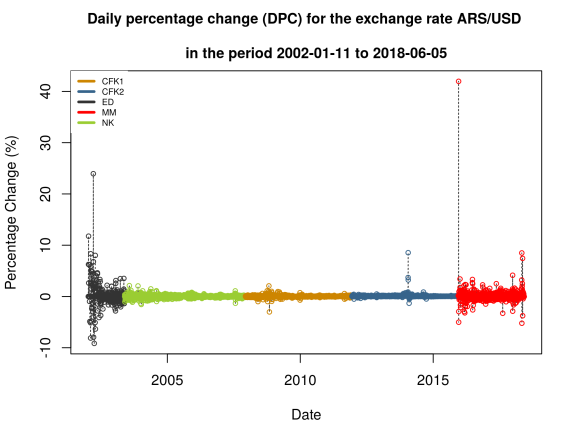 Now we can see that the sudden variations in the price of the USD are more evident in this plot. The next thing we can do is to ask ourselves the following questions:

The first question could be easily answered using an R base function called order() to sort out our dataframe and immediately after that indexing the resulting dataframe from rows 1 up to 10:

Now if we want to know during which presidencies these top-10 highest DPC’s did occur then we can simply use another R base function, in this case table() will give us the answer.

Up to this point we know that during this period 6 out of the top-ten’s DPC corresponds to Duhalde’s presidency, 3 to the current Macri’s presidency and 1 to the Fernandez’s second term. Moreover at the fourth column named ‘variation’ we can see that these DPC’s values are sparse ranging from 6% to 41% approximately. So the next thing that we could do to further clarify this results is to count these values using an histogram. 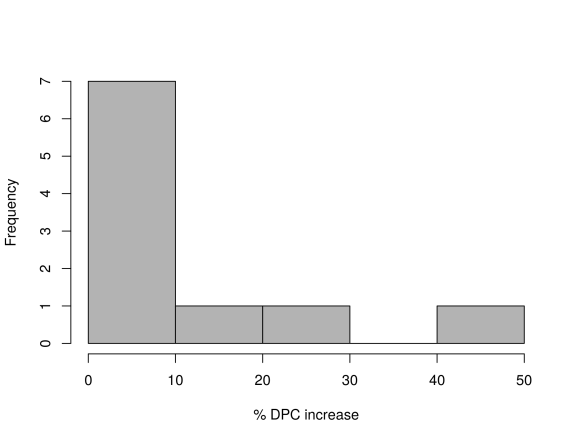 From this histogram we can see that 7 out of the top-ten highest DPC’s range from 0%-10% and only one for the others intervals. But again, we don’t know during which presidencies these highest  and lowest variations occurred.
Now we are going to need a new function that given our dataset and the desired ranges of the intervals gives us a new dataset with the counts for every president in every interval. So we named this function countNumberInBreaks() and the script is the following:

From this plot now we can see that during the 2002-2018 period the top-ten highest DPC‘s were:

Well, it’s enough for now. We are not going to draw any conclusions from this or to make any interpretation. That’s maybe, if you want your task. We also invite you to ask here other questions and maybe we can answer it.

Now, to finish this post we are going to do a (.GIF) animated file with ImageMagick from the terminal in Linux.

The idea behind the animation is to make a set of multiple .png or .jpeg files using a loop in R, save this individual files (think of them as if they were film frames) and then from the terminal use convert of ImageMagick to make the animated plot.

So to start we write a function in R called plotPNGs() that basically is a loop that saves locally multiple plots that will be used later with convert to create the .GIF file.

Then, we create a directory “plot1” to save the files and run the function:

We choose the parameter steps = 23 because we decide to use approximately 200 frames in our animation, so 23 comes out from

This gives us 194 .PNG files. Finally we go to the directory where the files were created and use convert to make the .GIF file.

We repeat this process for another data and we get:

And now we have two animated plots that show us the evolution of the ARS/USD exchange rate in the considered period where we can clearly see the sudden changes in its value.

ShareTweet
To leave a comment for the author, please follow the link and comment on their blog: R – Monkeys Working.
R-bloggers.com offers daily e-mail updates about R news and tutorials about learning R and many other topics. Click here if you're looking to post or find an R/data-science job. Want to share your content on R-bloggers? click here if you have a blog, or here if you don't.