[This article was first published on Rstats – OUseful.Info, the blog…, and kindly contributed to R-bloggers]. (You can report issue about the content on this page here) Want to share your content on R-bloggers? click here if you have a blog, or here if you don't.
ShareTweet

What’s an effective way of helping a student run a desktop application when their own computer won’t run the application, for whatever reason, locally? Virtualised software, running remotely, provides one solution. So here’s an example of a project that looks at doing just that:  DIT4C (“Data Intensive Tools for the Cloud”), ‘a platform for hosting data analysis tools “in the cloud” using containers‘ [repo].

Prepackaged, standalone containers are defined for a range of applications, including RStudio, Jupyter notebooks, Jupyter+R and OpenRefine

The application containers are built on top of a base container that includes an nginx webser/proxy, a GoTTY shell and a file uploader. The individual containers then have a “homepage” that links to the particular application:

So what do we have at this point?

These services are all running within a single container. I don’t know if there’s a way of linking multiple containers using docker-compose? This would require finding some way of announcing the services provided by each container, to a central nginx server which could then link to each from a single homepage. But this would mean separate terminals and file loaders into each one (though maybe the shared files could be handled as a single mounted volume shared across all the linked containers?

Skimming the docs, I notice reference to a base X11 desktop container. Interesting… I have a PhD student looking for an easy way to host a Qt widget running application in the cloud for evaluation purposes. To this end I’ve just started looking around for X11/noVNC web client containers that would allow us to package the app in a simple container then access it from something like Digital Ocean (given there’s no internal OU docker container hosting service that I’m allowed to access (or am aware of… Maybe on the Faculty cluster?)). 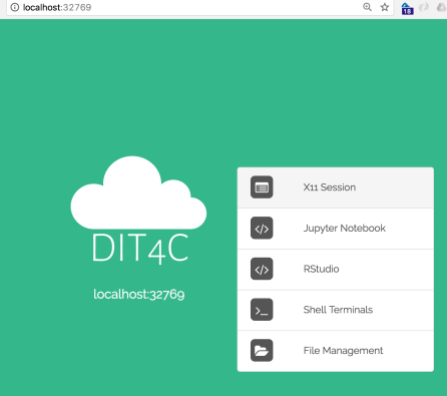 Following the X11 Session link, we get to a desktop:

There’s an icon in the toolbar to the application we want – QGIS:

What I’m thinking now is this could be handy for running the V-REP robot simulator, and maybe Gephi…

It also makes me think that things could be simplified a little further by offering a link to QGIS, rather than X11 Application, and opening the application in full screen mode (on the virtualised desktop) on start-up. (See Distributing Virtual Machines That Include a Virtual Desktop To Students – V-REP + Jupyter Notebooks for some thoughts on how to use VMs to distribute a single pre-launched on startup desktop application to try to simplify the student experience.)

It also makes me even more concerned about the apparent lack of interest in the OU, and even awareness of, the possibilities of virtualised software offerings. For example, at a recent SIG group on (interactive) maps/mapping, brief mention was made of using QGIS, and problems arising therefrom (though I forget the context of the problems). Here we have a solution – out there for all to see and anyone to find – that demonstrates the use of QGIS in a prebuilt container. But who, internally, would think to mention that? I don’t think any of the Tech Enhanced Learning folk I’ve spoken to would even consider it, if they are even aware of it as an option?

(Of course, in testing, it might be rubbish… how much bandwidth is required for a responsive experience when creating detailed maps? See also one of my earlier related experiments: Accessing GUI Apps Via a Browser from a Container Using Guacamole, which remotely accessing the Audacity audio editor using a cloud hosted container.)

Skimming through the repos, I (mistakenly, as it happens) thought I saw a reference to resbaz (ResBaz Cloud – Containerised Research Apps as a Service). I was mistaken in thinking I had seen a reference in the code I skimmed though, but not, it seems, in the fact that there is a relationship: 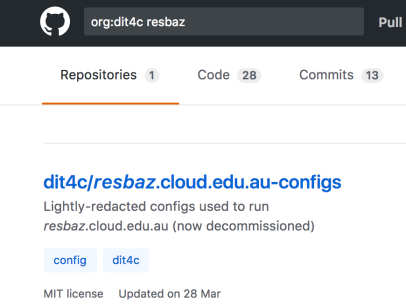 And so it seems that perhaps more interestingly than the standalone containers is that DIT4C is a platform offering (architecture docs), providing authenticated access to users, file persistence (presumably?) and the ability to launch prebuilt docker images as required.

That said, looking at the Github repository commits for the project, there appears to have been little activity since March 2017 and the gitter channel appears to have gone silent at the end of 2016. In addition, the docs for getting an instance of the platform up and running are a little bit too sparse for me to follow easily…

So maybe as a project, DIT4C is perhaps now “of historical interest” only, rather than being a live project we might have been able to jump on the back of to get an OU hosted remote computing lab up and running? 🙁 That said, the ResBaz (Research Bazaar) initiative, “worldwide festival promoting the digital literacy emerging at the center of modern research”, still seems to be around…

ShareTweet
To leave a comment for the author, please follow the link and comment on their blog: Rstats – OUseful.Info, the blog….
R-bloggers.com offers daily e-mail updates about R news and tutorials about learning R and many other topics. Click here if you're looking to post or find an R/data-science job. Want to share your content on R-bloggers? click here if you have a blog, or here if you don't.