[This article was first published on RStudio Blog, and kindly contributed to R-bloggers]. (You can report issue about the content on this page here) Want to share your content on R-bloggers? click here if you have a blog, or here if you don't.
ShareTweet

A new release of the rmarkdown package is now available on CRAN. This release features some long-requested enhancements to the HTML document format, including:

There are also three new formats for creating GitHub, OpenDocument, and RTF documents as well as a number of smaller enhancements and bug fixes (see the package NEWS for all of the details).

Here’s what the floating table of contents looks like on one of the R Markdown website’s pages: 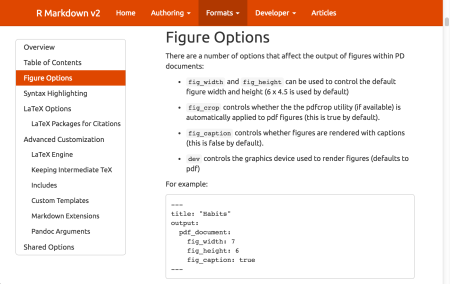 When the knitr chunk option echo = TRUE is specified (the default behavior) the R source code within chunks is included within the rendered document. In some cases it may be appropriate to exclude code entirely (echo = FALSE) but in other cases you might want the code available but not visible by default.

The code_folding: hide option enables you to include R code but have it hidden by default. Users can then choose to show hidden R code chunks either indvidually or document wide. For example:

Here’s the default HTML document template with code folding enabled. Note that each chunk has it’s own toggle for showing or hiding code and there is also a global menu for operating on all chunks at once.

Note that you can specify code_folding: show to still show all R code by default but then allow users to hide the code if they wish.

You can organize content using tabs by applying the .tabset class attribute to headers within a document. This will cause all sub-headers of the header with the .tabset attribute to appear within tabs rather than as standalone sections. For example:

Here’s what tabbed sections look like within a rendered document: 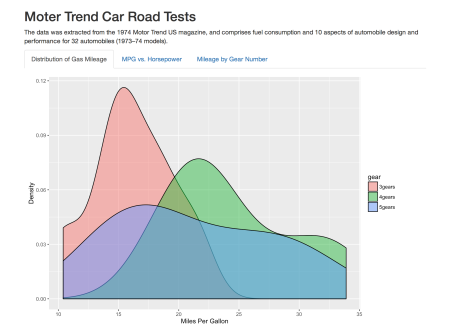 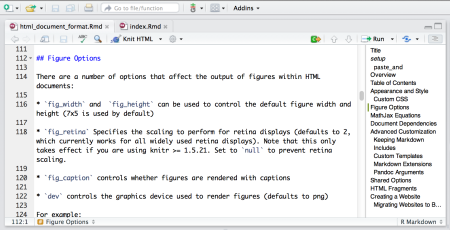 We’ve got lots of additional work planned for R Markdown including new document formats, additional authoring enhancements in RStudio, and some new tools to make it easier to publish and manage documents created with R Markdown. More details to follow soon!

ShareTweet
To leave a comment for the author, please follow the link and comment on their blog: RStudio Blog.
R-bloggers.com offers daily e-mail updates about R news and tutorials about learning R and many other topics. Click here if you're looking to post or find an R/data-science job. Want to share your content on R-bloggers? click here if you have a blog, or here if you don't.