[This article was first published on Mathew Analytics » R, and kindly contributed to R-bloggers]. (You can report issue about the content on this page here) Want to share your content on R-bloggers? click here if you have a blog, or here if you don't.
ShareTweet

Applied statistical theory is a new series that will cover the basic methodology and framework behind various statistical procedures. As analysts, we need to know enough about what we’re doing to be dangerous and explain approaches to others. It’s not enough to say “I used X because the misclassification rate was low.” At the same time, we don’t need to have doctoral level understanding of approach X. I’m hoping that these posts will provide a simple, succinct middle ground for understanding various statistical techniques.

, it would suggest that

are conditionally independent given variable

in the following graphic depends only on the value of variable

Let’s consider a graphical model with

variables and a set of dependencies between the variables,

, we denote a set of conditional probability distributions for each

given the parent variable. In the following directed acyclic graph, we see that

. This means that the probability of

is conditionally dependent only on

and the value of

does not explain the other random variables. For belief networks, inference involves computing the probability of each value of a node in a network.

There you go; the absolute basics. And below is a presentation on belief networks that I made last year. 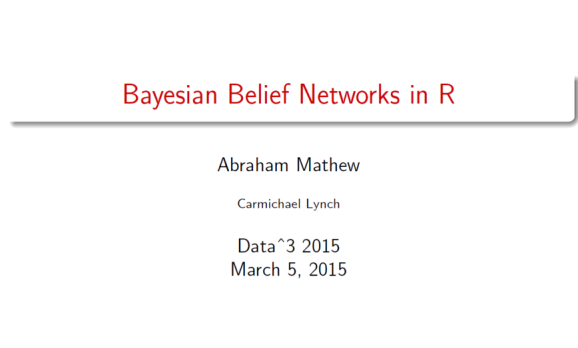 ShareTweet
To leave a comment for the author, please follow the link and comment on their blog: Mathew Analytics » R.
R-bloggers.com offers daily e-mail updates about R news and tutorials about learning R and many other topics. Click here if you're looking to post or find an R/data-science job. Want to share your content on R-bloggers? click here if you have a blog, or here if you don't.