[This article was first published on Statisfaction » R, and kindly contributed to R-bloggers]. (You can report issue about the content on this page here) Want to share your content on R-bloggers? click here if you have a blog, or here if you don't.
ShareTweet 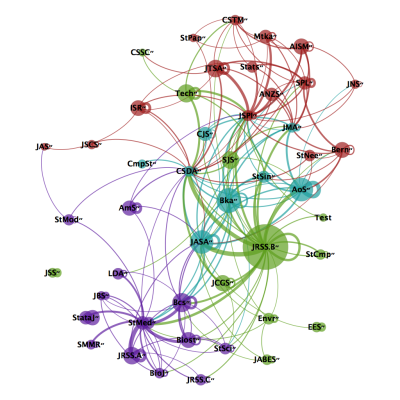 Xian blogged recently on the incoming RSS read paper: Statistical Modelling of Citation Exchange Between Statistics Journals, by Cristiano Varin, Manuela Cattelan and David Firth. Following the last JRSS B read paper by one of us! The data that are used in the paper (and can be downloaded here) are quite fascinating for us, academics fascinated by academic rankings, for better or for worse (ironic here). They consist in cross citations counts

is the number of citations from articles published in journal

in 2010 to papers published in journal

I looked at the ratio of Total Citations Received by Total Citations made. This is a super simple descriptive statistic which happen to look rather similar to Figure 4 which plots Export Scores from Stigler model (can’t say more about it, I haven’t read in detail). The top five is the same modulo the swap between Annals of Statistics and Biometrika. Of course a big difference is that the Cited/Citation ratio isn’t endowed with a measure of uncertainty (below, left is my making, right is Fig. 4 in the paper). 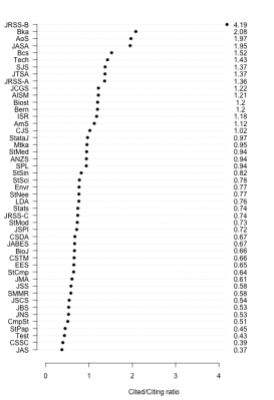 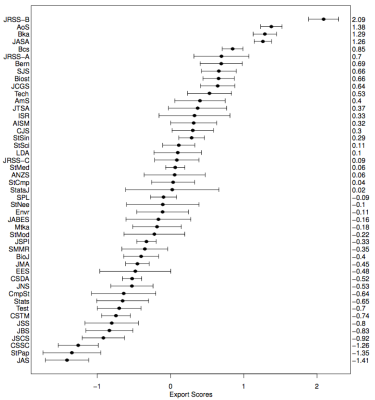 I was surprised not to see a graph / network representation of the data in the paper. As it happens I wanted to try the gephi software for drawing graphs, used for instance by François Caron and Emily Fox in their sparse graphs paper. I got the above graph, where:

The two software journals included in the dataset are quite outliers:

All that is just for the fun of it. As mentioned by the authors, citation counts are heavy-tailed, meaning that just a few papers account for much of the citations of a journal while most of the papers account for few citations. As a matter of fact, the total of citations received is mostly driven by a few super-cited papers, and also is the Cited/Citations matrix

that I use throughout for building the graph. A reason one could put forward about why JRSS B makes it so well is the read papers: for instance, Spiegelhalter et al. (2002), DIC, received alone 11.9% of all JRSS B citations in 2010. Who’d bet the number of citation this new read paper (JRSS A though) will receive?

ShareTweet
To leave a comment for the author, please follow the link and comment on their blog: Statisfaction » R.
R-bloggers.com offers daily e-mail updates about R news and tutorials about learning R and many other topics. Click here if you're looking to post or find an R/data-science job. Want to share your content on R-bloggers? click here if you have a blog, or here if you don't.