[This article was first published on Amy Whitehead's Research » R, and kindly contributed to R-bloggers]. (You can report issue about the content on this page here) Want to share your content on R-bloggers? click here if you have a blog, or here if you don't.
ShareTweet

I’ve been doing a lot of analyses recently that need rasters representing features in the landscape. In most cases, these data have been supplied as shapefiles, so I needed to quickly extract parts of a shapefile dataset and convert them to a raster in a standardised format. Preferably with as little repetitive coding as possible. So I created a simple and relatively flexible function to do the job for me.

The function requires two main input files: the shapefile (shp) that you want to convert and a raster that represents the background area (mask.raster), with your desired extent and resolution. The value of the background raster should be set to a constant value that will represent the absence of the data in the shapefile (I typically use zero).

The function steps through the following:

The function is relatively quick, although is somewhat dependant on how complicated your shapefile is. The more individual polygons that need to filtered through and extracted, the longer it will take.

Below is a trivial example based on some readily available data in the maptools and biomod2 packages. Here I load a raster and a shapefile that represent our background of interest and foreground feature, respectively, and then plot them.

One of the nice things about working with shapefiles in R is that you can subset the data based on attribute data the same way that you would any dataframe. This is really useful when combined with the shp2raster function as it means that we only need to convert the parts of the shapefile that we are actually interested in. For example, you may wish to create separate rasters for different landuse types that are contained in one shapefile as polygons with different attributes. You can see this in the trivial example below where I create two rasters from our world polygon data that select specific countries to convert based on the attribute NAME in the wrld_simpl shapefile. 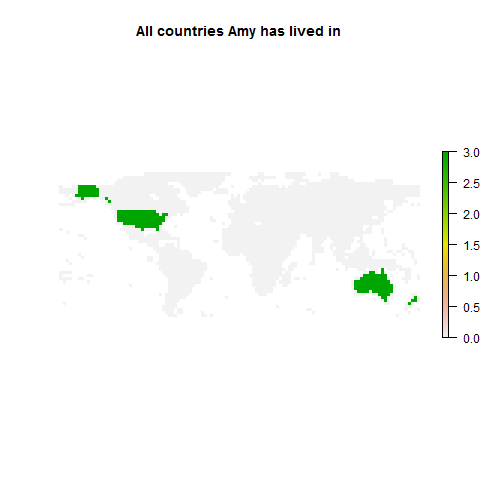 Clearly these are quite trivial examples, where the raster and polygon layers don’t match very well (I mean, what is that blob of four pixels that represents my home country?!). But you hopefully get the general idea. In this case, I haven’t needed to do any transformation of the projections.

Below is an example where I was interested in creating a layer that represented protected areas within the Hunter Valley, Australia, for a conservation planning exercise. The available shapefile represented four different reserve types (National Parks, Nature Reserves, Regional parks and State Conservation Areas). In this case, the initial mask and polygon layers were in different projections, so I converted the shapefile to the correct projection by using transform=TRUE and proj.from and proj.to in the shp2raster call. I also wanted to extract a subset of the reserve types contained within the shapefile that related to National Parks (NP) and Nature Reserves (NR). The protected areas of interest needed to have a value of 3, while the background raster has a value of 0. Unfortunately I can’t supply the original layers but a real example of the code in action and the output map are below. 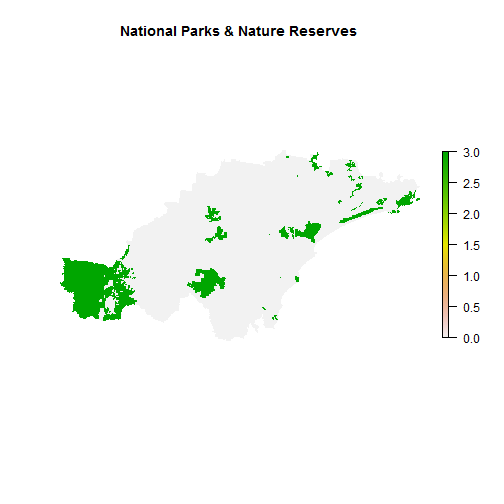 The function should work with both polygon and polyline data. You can also use point data if you buffer it by a small amount first to create tiny polygons around the points. I’d pick a buffer size that makes sense relative to the resolution of the mask.raster.

Go forth and convert! Feedback on improvements definitely welcome – please leave a comment.

ShareTweet
To leave a comment for the author, please follow the link and comment on their blog: Amy Whitehead's Research » R.
R-bloggers.com offers daily e-mail updates about R news and tutorials about learning R and many other topics. Click here if you're looking to post or find an R/data-science job. Want to share your content on R-bloggers? click here if you have a blog, or here if you don't.