[This article was first published on A HopStat and Jump Away » Rbloggers, and kindly contributed to R-bloggers]. (You can report issue about the content on this page here) Want to share your content on R-bloggers? click here if you have a blog, or here if you don't.
ShareTweet

In my work, we have come across problems where we wanted to visualize data in 4 dimensions (4D). The data came as brains, which are represented as 3D volumes and we wanted to visualize them at different time points (hence 4D). We were using images that are acquired one image per visit (CT structural scans, particularly), where each patient had a maximum of 10 time points. (The methods below have not been tested or adapted for fMRI scans that have hundreds of time points).

As a result, we created the package brainR (CRAN package) to fit our needs with this. We strive to make figures such as this 4D example.

This figure can be rotated and zoomed. The slider provides a changing opacity for the overall brain (in order to see the structures inside). The buttons for each “visit” represent enhanced lesions in patients with MS detected by SuBLIME (Sweeney et al. 2013). I feel that these figures can convey results that an orthographic figure such as 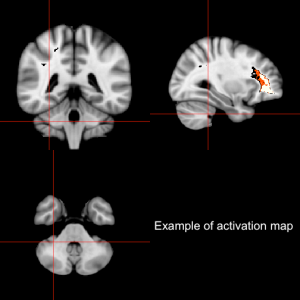 cannot, nor can a single slice over time as these enhancing lesions are all over the brain.

The steps to make images such asin brainR is this:

The last step is what I call 4D visualization, being able to move around space with rotation, zooming, and translation while moving through another dimension, usually different time points, ROIs, structures, etc. The reason we went this route is a few reasons, but particularly:

Number 4. was interesting as I looked into tools like Blender, Paraview, or CINEMA 4D, which are are highly powerful. Many of them have a GUI-only interface and some used for much visualizing more extensive than (and not adapted so well for) biomedical data, such as full scenes and landscapes. Most solutions, such as those for MATLAB, require the user either have MATLAB programming experience or download software, which we found to be a large and unneccesary burden – so we use JavaScript in a browser. Granted, to run brainR you need to know R, but the end user just needs to know how to open a browser. If the end user cannot do that, I don’t think 4D visualization is for them anyway.

Now, let’s rundown some of the functions:

Overall, this is my first package and the paper is submitted to R Journal. The admins at CRAN were very helpful in getting the package ready for production. It wasn’t easy, but it’s done.

The development version of brainR is located at this gitHub package.

Note, there is some interesting work done with 3D objects (and some 4D functionality) into PDF recently and there is interesting overview of methods tried located here if you’re interested. We chose the web because it rendered faster and had easier integration with JavaScript.

ShareTweet
To leave a comment for the author, please follow the link and comment on their blog: A HopStat and Jump Away » Rbloggers.
R-bloggers.com offers daily e-mail updates about R news and tutorials about learning R and many other topics. Click here if you're looking to post or find an R/data-science job. Want to share your content on R-bloggers? click here if you have a blog, or here if you don't.