I’ve recently come across the https://www.undata-api.org/ website, which makes available all the great data that has been gathered by the UN. There’s literally a thousand different datasets one could analyze, and I intend on doing just that, but for some reason I opted to look at some of the world tourism data they have collected. Perhaps this is my subconscious telling me to travel more, or to get the hell out of the epically horrible winter we’ve been having over here in NYC.

So with no further ado, I present to you a thoroughly incomplete analysis of the UN world tourism data! First I set out to look at the amount of money each country spent on advertising themselves to unsuspecting citizens in other countries during the period of 1995-2012.

Country expenditure on tourism between 1995 and 2012

The results above show how the USA is the country that consistently spends the most on tourism advertising in other countries. We can also see that Germany, France and the UK (and to a lesser extent Spain and Italy) are amongst the European nations that spend the most. However, what I find the most interesting is the relative position of China, that starts among the countries that spend the less on tourism in 1995, only to be in second position by the time we reach the year of 2012. It is possible to notice a sharp spending increase by the time 2007-08 comes around, and I would be interested to find out if this may be linked to the Beijing Olympics.

To generate the video above, I simply plotted static images (for example a PNG file) of the data at each timepoint and concatenated everything into GIF format using the following linux command:

convert is a highly useful function that I call fairly often, and contains many more arguments that allow to tailor very convincing video media. (Note that there are many other ways you could do this, in particular ffmpeg or the animation package in R)

Next, I set out to check whether spending large amounts of money to advertise the virtues of your country abroad is actually worth it. In other words, does more spending abroad equate to more people visiting your country? 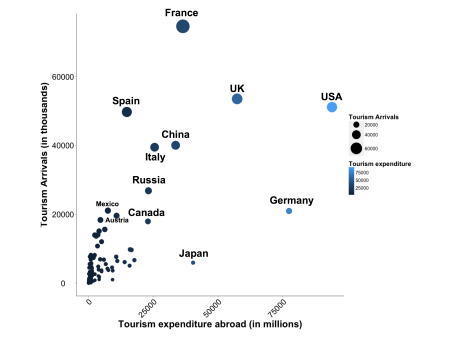 Overall we see that France can be deemed as the most popular country – not only does it host the most tourist but also while spending far less on tourism than many other countries. As a frenchman, I find this tres naturel, since we do have, after all, the best food, wine, women and weather (some people may also point out the historical culture but I hate museums so there). While Spain and the UK do well, it is disturbing to see how bad the return on investment is for countries such as the USA, Germany and Japan (that surprised me, although geographical distance may be a factor here)

Finally, we can also search for trends in tourism travel over the period of 1995-2012. Here, we can plot the cumulative number of tourist entries recorded in countries across the world during each year: 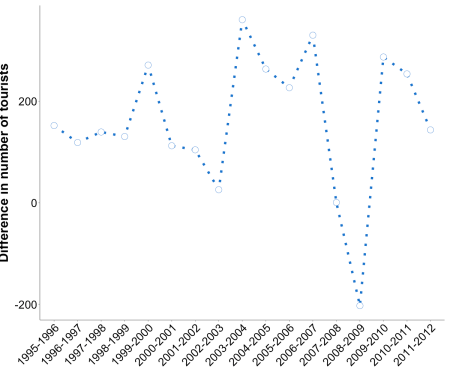 There is noticeable dip of worldwide tourist entries between the year 2007-2009, which may be blamed upon a greedy minority of financial ‘experts’. I have to admit that although I heard and read a lot of about the 2008 financial crisis, it never affected me noticeably. However, it is remarkable to see the extent with which it affected tourism travel, and one can only imagine the knock-on effect it must have had on the economy of entire countries.