[This article was first published on Anything but R-bitrary, and kindly contributed to R-bloggers]. (You can report issue about the content on this page here) Want to share your content on R-bloggers? click here if you have a blog, or here if you don't.
ShareTweet
This article was first published on analyze stuff. It has been contributed to Anything but R-bitrary as the second article in its introductory series.

By Max Ghenis
Today, we celebrate the would-be 85th birthday of Martin Luther King, Jr., a man remembered for pioneering the civil rights movement through his courage, moral leadership, and oratory prowess. This post focuses on his most famous speech, I Have a Dream [YouTube | text] given on the steps of the Lincoln Memorial to over 250,000 supporters of the March on Washington. While many have analyzed the cultural impact of the speech, few have approached it from a natural language processing perspective. I use R’s text analysis packages and other tools to reveal some of the trends in sentiment, flow (syllables, words, and sentences), and ultimately popularity (Google search volume) manifested in the rhetorical masterpiece.

Word clouds are somewhat controversial among data scientists: some see them as overused and cliche, while others find them a useful exploratory tool, particularly for connecting with a less analytical audience. I consider them a fun and useful starting point, so I started off by throwing the speech’s text into Wordle. 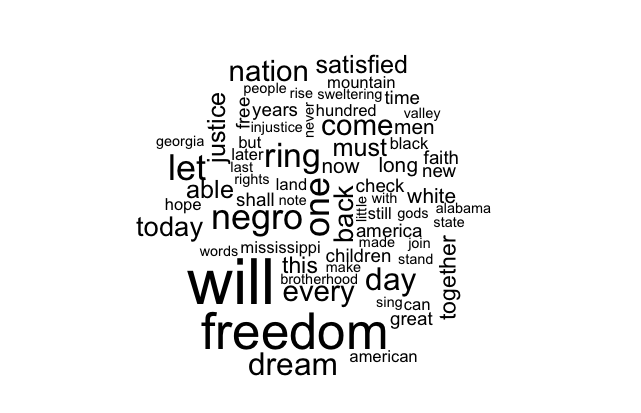 Readability tests are typically based on syllables, words, and sentences in order to approximate the grade level required to comprehend a text. qdap offers several of the most popular formulas, of which I chose the Automated Readability Index.
By graphing similarly to the above polarity chart, I show readability to be mostly constant throughout the speech, though it varies within each section. This makes sense, as one generally avoids too many simple or complex sentences in a row.

With several metrics for each sentence, along with the natural outcome variable of log(Google hits), I ran a linear regression to determine what makes a sentence memorable. I pruned the regressor list using the stepAIC backward selection technique, which minimizes the Akaike Information Criterion and leads to a more parsimonious model. Finally, based on preliminary model results, I added polynomials of readability and excluded word count, syllable count, and syllables per word (readability is largely based on these factors).
stepAIC returns the optimal model, which can be summarized like any lm object.
Four significant regressors explained 56% of the variance (R2=0.5564): a third degree polynomial of readability, along with pct.complete.100 (where the sentence was in the speech); polarity was not significant.
The effect of pct.complete can be calculated by exponentiating the coefficient, since I log-transformed the outcome variable:
This result can be interpreted as the following: a 1% increase in the location of a sentence in the speech was associated with a 1.3% increase in search hits.
Interpreting the effect of readability is not as straightforward, since I included polynomials. Rather than compute an average effect, I graphed predicted Google hits for values of readability's observed range, holding pct.complete.100 at its mean.

To a degree, these were intuitive findings--the ebb and flow of intensity and sentiment is a powerful rhetorical device. While we may never be able to fully deconstruct the meaning of this speech, techniques explored here can provide brief insight into the genius of MLK and the power of his message.
Thanks for reading, and enjoy your MLK day!

ShareTweet
To leave a comment for the author, please follow the link and comment on their blog: Anything but R-bitrary.
R-bloggers.com offers daily e-mail updates about R news and tutorials about learning R and many other topics. Click here if you're looking to post or find an R/data-science job. Want to share your content on R-bloggers? click here if you have a blog, or here if you don't.