This is another of those confluence style posts, where a handful of things I’ve read in quick succession seem to phase lock in my mind:

(brought to mind in part via @downes a week or so ago: How to Synch 32 Metronomes)

The first was a post by Alan Levine on Making Text Work, which describes a simple technique for making text overlays on photographs create a more coherent image than just slapping text on:

One of the techniques I use on presentation slides from time to time is a solid filled banner or stripe containing text, some opaque, sometimes transparent. I wouldn’t claim to be much of an artist but it makes the slides slightly more interesting than a header with an image in the middle of the slide, surrounded by whitespace…

Reading Alan’s post, it occurred to me that once you get the idea of using a solid or semi-transparent solid filled background to a text label, you tend to remember it and add it to your toolbox of presentation ideas (of course, you might also forget and later rediscover this sort of trick… My own slides tend to crudely follow particular design ideas I’ve recently picked up on, albeit in a crude and often not very well polished way, that I’ve decided I want to try to explore…) In the slide above, several tricks are evident: the solid filled text label, the positioning of it, the backgrounded blog post that actually serves as a reference for the slide (you can do a web search for the post title to learn more about the topic), the foregrounded image, rotated slightly, and so on.

The thing that struck me about Alan’s post was that it reminded me of a time before I was really aware of using a solid filled label to foreground a piece of text, which in turn caused me to reflect on other things I now take for granted as ideas that I can draw on and combine with other ideas.

In the same way we learn to spell, and learn to use punctuation, and start to pick up on the grammer that structures a language, so we can use those rules to construct ever more complex sentences. Once we know the rules, it becomes a choice as to whether or not we employ them.

Here’s an example of how we might come to acquire a new design idea, drawn from a brief conversation with @mediaczar a couple of nights ago when Mat asked if anyone knew the name od this sort of chart combination:

I didn’t know what to call the chart, but thought it should be easy enough to try to wrangle one together using ggplot in R, guessing that a geom_errorbarh() might work; Mat came back suggesting geom_crossbar().

Here’s a minimal code fragment I used to explore it:

Here’s an example of how I used it – in an as yet unlabelled sketch showing for a particular F1 driver, their gird position for each race (red bar) the the number of places they gained (or lost) during the first lap: 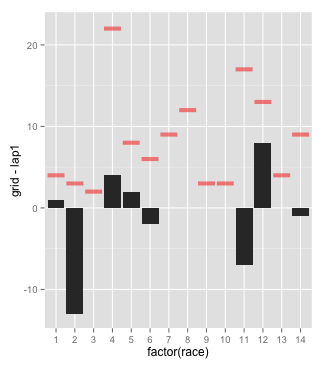 So now I now how to achieve that effect…

Now for one two more things… Just after reading Alan’s post, I read a post by James Allen on possible race strategies for the Japanese Grand Prix: 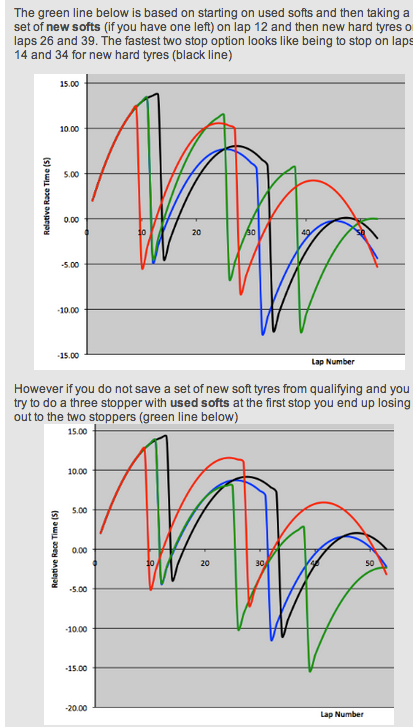 The first thing that struck me was that even if you vaguely understand how a race chart works, the following statement may not be readily obvious to you from the top chart (my emphasis):

Three stops is actually faster [taking new softs on lap 12], as the [upper] graph … shows, but it requires the driver to pass the two stoppers in the final stint. If there is a safety car, it will hand an advantage to the two stoppers.

So, can you see why the three stopper (the green line) “requires the driver to pass the two stoppers in the final stint”? Let’s step back for a moment – can you see which bit of the graphs represent an overtake?

This is actually quite a complex graph to read – the axes are non-obvious, and not that easy to describe, though you soon pick up a feeling for how the chart works (honest!). Getting a sensible interpretation working for the surprising feature – the sharp vertical drops – is one way of getting into this chart, as well as looking at how the lines are postioned at the extreme x values (that is, at the end of the first and last laps).

The second thing that occurred to me was that we could actually remove the fragment of the line that shows the pitstop and instead show a separate line segment for each stint for each driver, and hence the line crossings that do not represent required overtakes. I’ve used this technique before, for example to show the separate stints on a chart of laptimes for a particular driver over the course of a race:

And as to where I got that trick? I think it was a bastardisation of a cycle plot, which can be used to show monthly, weekly or seasonal trends over a series of years:

Whatever the case, one of the ideas I always have in mind is whether it may be possible to introduce white space in the form of a break in a line in order to separate out different groups of data in a very simple way.