This post is a response to a comment on Cricinfo on Donald Bradman about his inclusion in All Time World XI. AK47_pk said,

“7 innings against westindies, 7 against south afriqa, 5 against india nd 61 against englnd(so basicly he only played against england) nd sir bradman is in world eleven..its a joke….i bet he enjoyed english bowlers….how can you judge some 1 when he has only played against 1 country??????????????? he was lucky that he didnt play against marshal, ambroz, imran, wasim, waqar, shoaib nd the likes of murali…I DNT THINK HE SHOULD BE REPRESNTING THE WORLD 11 BECAUSE HE DIDNT PLAY AGAINST WORLD BUT ENGLAND. SACHIN ND LARA ARE FAR BETTER PLAYERS THEN BRADMAN…….TAKE THIS, MAKE SACHIN PLAY AGAINST BANGLA DESH OR ZIMBABWE ALL THE TIME ND YOU,LL SEE HE,LL AVERAGE 200+ NOT 99….GET REAL PPL ND STOP OVER RATING BRADMAN.”

I’m shocked at such irresponsible comments, and strongly object to it. Just see the chart below as one of the proofs to understand the class of Sir Donald Bradman, and why he’s rated as the best batsman ever. He scored approx. 140 runs/match compared to a maximum of ~ 93 runs/match by any other cricketer. Bradman belongs to a separate elite class altogether. Lets understand his performances before comparing him to mere mortals.

If you must, here’s how he compares against Tendulkar and Lara. Just look at Bradman’s runs/match, high score probability, % centuries scored and contribution to team’s victory compared to Tendulkar’s and Lara’s to understand the vast difference between them.


Enough comparing him with others. Lets review his performances.

Sir Donald Bradman played for Australia between 1928 and 1948, however he couldn’t play any cricket between 1939 and 1945 due to the second world war. What a loss for all of us! And in this period, he played against all worthy opponents in that era. 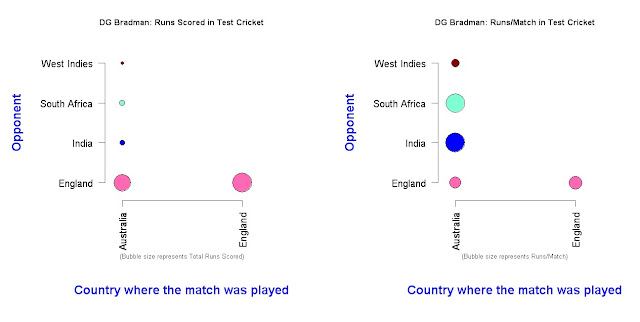 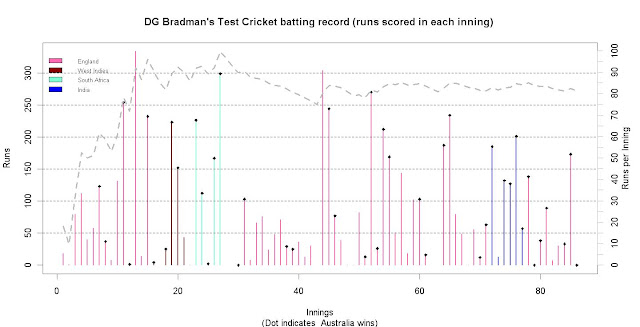