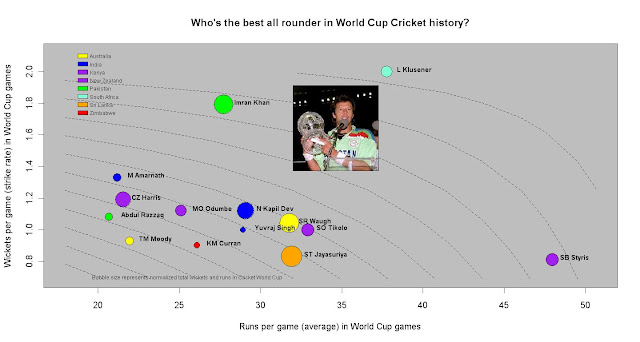 We love cricket all rounders (players who can both bat and bowl). These players are great assets for their teams and captains love ’em. So, who are the best all rounders in World Cup Cricket history?

Kapil, Steve Waugh and Jayasuriya have all performed really well but Imran Khan takes the lead based with high wickets/game. He has one of the highest wickets/game (1.8 wickets/game) and a great batting average (28 runs/game) – only 3 runs short of Jayasuriya and Steve Waugh’s runs/game.

Imran was a great competitor and a fearless leader.

The data for this analysis is in following form.

Update (Sep 16, 2010) >> Bernard recently commented  that Lance Klusener seems like the best all rounder from the above plot. Lance was of course a great player and we all loved watching him bowl fast deliveries and also hit bowlers all around the park as an aggressive batsman.

Table 1 has the all rounder data based on which I picked Imran Khan as the best. Here’s a quick comparison between Klusener and Imran.

1) Lance Klusener was really a bowler who could bat, whereas Imran was a thorough all rounder. Table 2 clearly demonstrates it.
– Although Imran played ~ twice the number of matches compared to Klusener, Imran faced 3.6 times more balls than Lance while batting
– Klusener’s contribution to his team’s victory was more from his bowling than his batting i.e. his side depended on him more for his bowling than his batting (see the contrast in Imran’s and Klusener’s “% wins when scored 50+” column in Table 2. Imran’s high scores resulted in his side’s victory 80% of times, whereas Klusener’s high scores resulted in his team’s victory only 33% of times)

2) Imran Khan took 1.5 times more wickets than Lance and scored 2 times as many runs (back in the days with no fielding restrictions), and captained his side to World Cup championship.

In my mind, Imran is the best all rounder although I would have loved my childhood hero, Kapil Dev, to be #1 but the data suggests otherwise.