By csgillespie
[This article was first published on Why? » R, and kindly contributed to R-bloggers]. (You can report issue about the content on this page here) Want to share your content on R-bloggers? click here if you have a blog, or here if you don't.
ShareTweet

As everyone knows, it seems that Sony is taking a bit of a battering from hackers.  Thanks to Sony, numerous account and password details are now circulating on the internet. Recently, Troy Hunt carried out a brief analysis of the password structure. Here is a summary of his post:

In this post, we will investigate the remaining 24,000 passwords that passed the dictionary attack.

As Troy points out, the vast majority of passwords only contained a single type, i.e. all lower or all upper case. However, it turns out that things get even worst when we look at character frequency.

In the password database, there are a 78 unique characters. So if passwords were truly random, each character should occur with probability 1/78 = 0.013. However when we calculate the actual password occurrence, we see that it clearly isn’t random. The following figure shows the top 20 password characters, with the red line indicting 1/78. 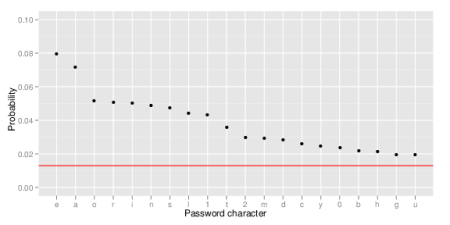 Unsurprisingly, the vowels “e”, “a” and “o” are very popular, with the most popular numbers being 1,2, and 0 (in that order). No capital letters make it into the top twenty. We can also construct the cumulative probability plot for character occurrence. In the following figure, the red dots show the pattern we would expect if the passwords were truly random (link to a larger version of the plot): 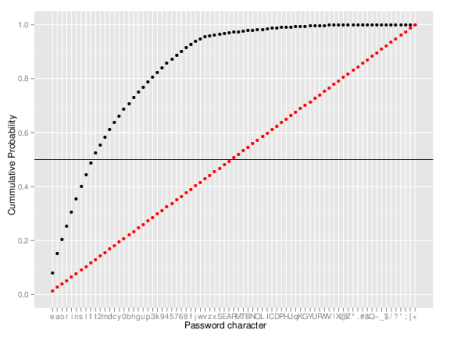 Clearly, things aren’t as random as we would like.

Let’s now consider the order that the characters appear. To simplify things, consider only the eight character passwords. The most popular number to include in a password is “1″. If placement were random, then in passwords containing the number “1″ we would expect to see the character evenly distributed. Instead, we get:

So in around of 84% of passwords that contain the number “1″, the number appears only in the second half of the password. Clearly, people like sticking a number “1″ towards the end of their password.

We get a similar pattern with “2″:

We see similar patterns with other alpha-numeric characters. 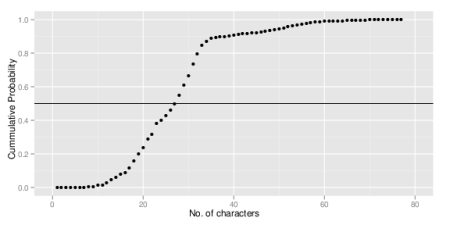 Typically when we calculate the probability of guessing a password, we assume that each character is equally likely to be chosen, i.e. the probability of choosing “e” is the same as choosing “Z”. This is clearly false. Also, since many systems now force people to have different character types in their password, it is too easy for users just to tack on a number as their final digit. I don’t want to go into how to efficiently explore “password space”, but it’s clear that a brute force search isn’t the way to go.

Personally, I’ve abandoned trying to remember passwords a long time ago, and just use a password manager. For example, my wordpress password is over 12 characters and consists of a completely random mixture of alphanumeric and special characters. Of course, you just need to make sure your password manager is secure….