[This article was first published on S+/R – Yet Another Blog in Statistical Computing, and kindly contributed to R-bloggers]. (You can report issue about the content on this page here) Want to share your content on R-bloggers? click here if you have a blog, or here if you don't.
ShareTweet

The function grnn.margin() (https://github.com/statcompute/yager/blob/master/code/grnn.margin.R) was my first attempt to explore the relationship between each predictor and the response in a General Regression Neural Network, which usually is considered the Black-Box model. The idea is described below:

The above-mentioned approach is computationally efficient but might be somewhat “brutal” in a sense that it doesn’t consider the variation in other variables.

By the end of Friday, my boss pointed me to a paper describing the partial dependence plot (Yes! In 53, we also have SVP who is technically savvy). The idea is very intriguing, albeit computationally expensive, and is delineated as below:

The idea of PDP has been embedded in the YAGeR project (https://github.com/statcompute/yager/blob/master/code/grnn.partial.R). In the chart below, I compared outcomes of grnn.partial() and grnn.margin() side by side for two variables, e.g. the first not so predictive and the second very predictive. In this particular comparison, both appeared almost identical. 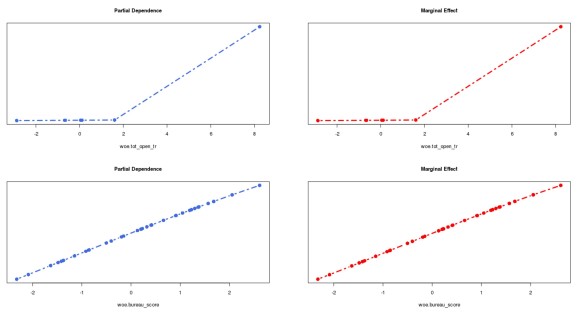 ShareTweet
To leave a comment for the author, please follow the link and comment on their blog: S+/R – Yet Another Blog in Statistical Computing.
R-bloggers.com offers daily e-mail updates about R news and tutorials about learning R and many other topics. Click here if you're looking to post or find an R/data-science job. Want to share your content on R-bloggers? click here if you have a blog, or here if you don't.