[This article was first published on R – Paolo Eusebi, and kindly contributed to R-bloggers]. (You can report issue about the content on this page here) Want to share your content on R-bloggers? click here if you have a blog, or here if you don't.
ShareTweet

Today was my first day with Jupyter Lab . I knew about Jupyter Lab listening episode 44 of  DataFramed, the DataCamp‘s official podcast presented by Hugo Bowne-Anderson. In this episode, Project Jupiter was described in the context of interactive computing by Brian Granger, professor of physics and data science at Cal Poly State University in San Luis Obispo, CA.

Brian is also co-founder of Project Jupyter and of the Altair project for data visualization. The episode is available at DataCamp website and other apps/platforms such as SoundCloud or CastBox.

As other statisticians and data scientists I had the opportunity to work with Python and Python notebooks but I really like R for data analysis, in particular because it is possible to do it in R Studio or other similar platforms. So, when I knew about the opportunity to work with a platform able to run Python and R notebooks(as well as Julia and many others) I started to be impatient!

JupyterLab is defined is a web-based user interface for Project Jupiter. It is possible to try it on the web without installation on Binder.

Installation is very simple. My option was to use only the terminal of my Mac, starting with pip:

JupyterLab requires the Jupyter Notebook version 4.3 or later. To check the version of  the notebook package installed:

Then I started JupyterLab:

JupyterLab opened automatically in the browser with the default workspace being http(s)://

I started really soon to appreciate the beauty and simplicity of the style, the opportunity of having a file system view on the left side of the screen, the availability of a text editor and the mixing of code and markdown cells in the notebooks.

It is really nice to have the opportunity to have a look at the cvs file in which you have stored the data of your project and the opening is really user friendly with the point and click option available for the delimiter (tab, comma or semicolon).

So far so good!

But my main reason for starting with Jupiter Lab was working with different programming languages in one web-based open-source platform.

I started to install an R notebook by means of the R kernel for the Jupiter environment. Unfortunately, it was not easy at all! After several tentatives I succeed using anaconda:

Then I started R from the terminal and installed the R kernel in the R session opened in the terminal:

Reloading Jupiter Lab I could see the Python and R notebooks side by side!

I have chosen the dark theme because I found more relaxing for my view! 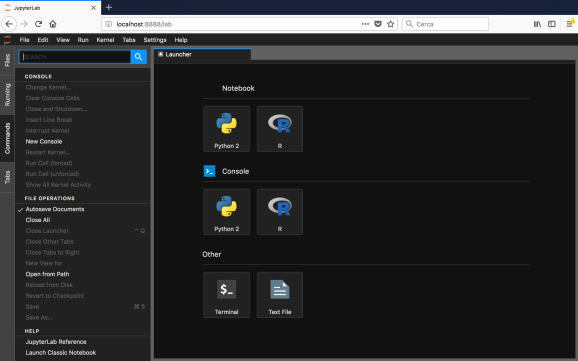 ShareTweet
To leave a comment for the author, please follow the link and comment on their blog: R – Paolo Eusebi.
R-bloggers.com offers daily e-mail updates about R news and tutorials about learning R and many other topics. Click here if you're looking to post or find an R/data-science job. Want to share your content on R-bloggers? click here if you have a blog, or here if you don't.