[This article was first published on R – Lynch Lab, and kindly contributed to R-bloggers]. (You can report issue about the content on this page here) Want to share your content on R-bloggers? click here if you have a blog, or here if you don't.
ShareTweet
When fitting a Bayesian model using MCMC (often via JAGS/BUGS/Stan), a number of checks are typically performed to make sure your model is worth interpreting without further manipulation (remember: all models are wrong, some are useful!):

One check, however, is often missing: a robust assessment of the degree to which the prior is informing the posterior distribution. Substantial influence of the prior on the posterior may not be apparent through the use of R-hat and visual checks alone. Version 0.9.2 of MCMCvis (now available on CRAN), makes quantifying and plotting the prior posterior overlap (PPO) simple.

MCMCvis is an R package designed to streamline analysis of Bayesian model results derived from MCMC samplers (e.g., JAGS, BUGS, Stan). It can be used to easily visualize, manipulate, and summarize MCMC output. The newest version is full of new features – a full tutorial can be found here.

To check PPO for a model, we will use the function MCMCtrace. As the function is used to generate trace and density plots, checking for PPO is barely more work than just doing the routine checks that one would ordinarily perform. The function plots trace plots on the left and density plots for both the posterior (black) and prior (red) distributions on the right. The function calculates the percent overlap between the prior and posterior and prints this value on the plot. See ?MCMCtrace in R for details regarding the syntax. 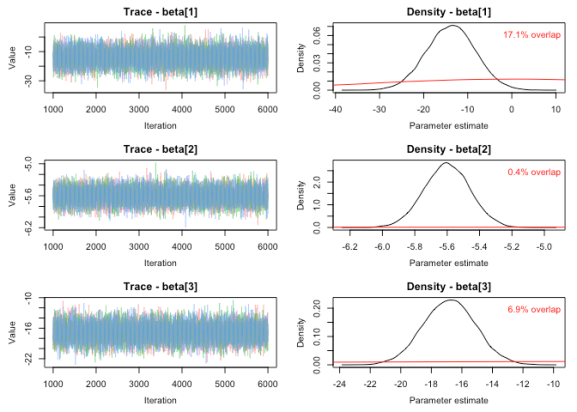 Checking the PPO has particular utility when trying to determine if the parameters in your model are identifiable. If substantial PPO exists, the prior may simply be dictating the posterior distribution – the data may have little influence on the results. If a small degree of PPO exists, the data was informative enough to overcome the influence of the prior. In the field of ecology, nonidentifiability is a particular concern in some types of mark-recapture models. Gimenez (2009) developed quantitative guidelines to determine when parameters are robustly identifiable using PPO.

While a large degree of PPO is not always a bad thing (e.g., substantial prior knowledge about the system may result in very informative priors used in the model), it is important to know where data was and was not informative for parameter estimation. The degree of PPO that is acceptable for a particular model will depend on a great number of factors, and may be somewhat subjective (but see Gimenez [2009] for a less subjective case). Like other checks, PPO is just one of many tools to be used for model assessment. Finding substantial PPO when unexpected may suggest that further model manipulation is needed. Happy model building!

Check out the rest of the new package freatures, including the option to calculate the number of effective samples for each parameter, ability to take arguments in the form of a ‘regular expression’ for the params argument, ability to retain the structure of all parameters in model output (e.g., parameters specified as matrices in the model are summarized as matrices).

ShareTweet
To leave a comment for the author, please follow the link and comment on their blog: R – Lynch Lab.
R-bloggers.com offers daily e-mail updates about R news and tutorials about learning R and many other topics. Click here if you're looking to post or find an R/data-science job. Want to share your content on R-bloggers? click here if you have a blog, or here if you don't.