While good draft picks and deft management can help you win championships, there is no doubt that NBA teams can massively gain, or lose, by trading players with one another. Here, I played around with some publicly available data given at basketball-reference.com, and had a look at the numbers behind all trades undertaken in the NBA from 1948 to present.

After some quick Python scraping and data cleaning, I first looked at the overall number of trades that were performed in the NBA during the period 1948-present.

Total number of trades completed by all NBA teams active between the 1948 and 2014 seasons.

Clearly, we see that the number of trades grows as we move along the years, which can probably be attributed to many factors such as the increasing ease of travelling/mobility and the growing number of teams in the NBA (Of course, the 2014 season is still ongoing so all the number are not all in yet!). Next, I set out to look at whether any NBA teams showed preferential attachment with one another, i.e. do any NBA teams show apreference towards trading with one another rather than with other teams? This could easily be summarized by constructing an adjacency matrix M of dimension N x N (where N is the number of NBA teams), in which each cell N(i, j) gives the number of trades operated between team i and j. For simplicity, I restricted the analysis to teams that are currently active.

While the plot above is pretty(ish), it is not very informative. The data is a lot more instructive if visualized as a mixed correlation plot (use the corrplot package!… we’ll also conveniently ignore the obvious caveat that I have not normalized the data for how long each team has been in the NBA….) 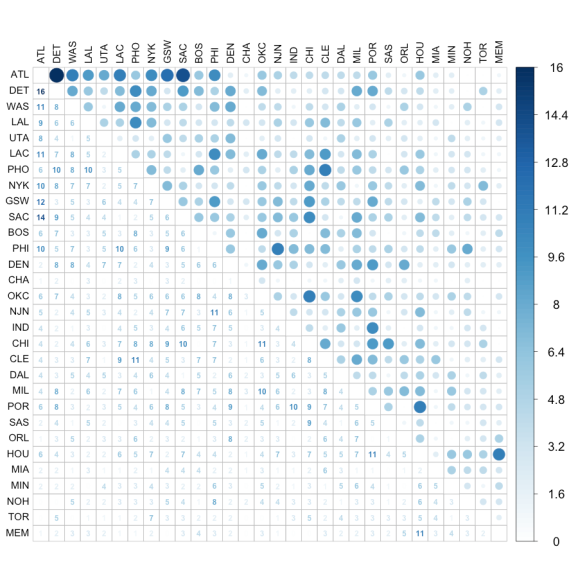 Adjacency matrix of number of trades completed between all pairs of currently active NBA teams. This includes all historical trade data from 1948 to present.

We can take this a step further and ask ourselves which teams have had the most success with trades, and also what are the best indivual trades ever performed in the history of the NBA? For this, I collected the win share data associated to each trade. The win share (WS) metric is an estimate of the number of wins produced by a player, and is a good way to determine how many victories an NBA player contributed to his team during his tenure there (more details can be found here). By computing the differential win share per trade (WS gained in trade – WS lost in trade), it is possible to gain an insight in the quality of each trade. 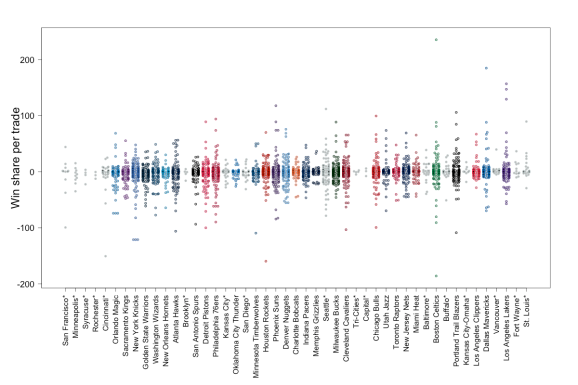 Distribution of win shares gained or lost by each team in the NBA. This includes all historical trade data from 1948 to present.

In the plot above, I marked inactive teams with a hyphen. We can see that the three currently active teams with the highest mean win share per trade are the LA Lakers, Dallas Mavericks and LA Clippers. In terms of win shares, the three greatest trade ever completed were:

Ultimately, I would like to create an interactive version of the plot above, so that details of each trade appear when the mouse is hovered over any given point. This is currently a work in progress that I will eventually publish here. All the relevant code for this analysis can be found on my github account.