[This article was first published on What You're Doing Is Rather Desperate » R, and kindly contributed to R-bloggers]. (You can report issue about the content on this page here) Want to share your content on R-bloggers? click here if you have a blog, or here if you don't.
ShareTweet 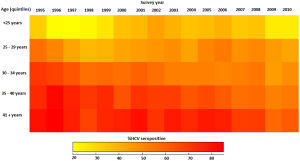 Quilt plots. Sounds interesting. The link points to a short article in PLoS ONE, containing a table and a figure. Here is Figure 1.

So, how do the authors justify publishing a method for drawing heat maps and then calling them “quilt plots”?

Well, they at least admit that the quilt plot is a heat map. Or as they insist throughout, “heat maps“, in quotes, you know, “so-called heat maps”. Here’s a paragraph from the discussion, reproduced in full because it is so nonsensical and strange:

“Quilt plots” can be considered as a simple formulation of “heat maps”. They produce a similar graphical display to “heat maps” when the “clustering” and “dendrogram” options are turned off. In addition, “quilt plots” have several advantages over “heat maps”. Firstly, unlike “heat maps”, “quilt plots” come with easily understood R-functions (i.e. plot, legend and color). In addition, R is freely available software and supported by leading statistical experts around the world, and it is important to promote the use of this software among epidemiological researchers. In addition it is difficult to learn to use R compared to other statistical packages. For example, “heat maps” require the specification of 21 arguments including hierarchical clustering, weights for re-ordering the row and columns dendrogram, which are not always easily understood unless one has an extensive programming knowledge and skills. One of the aims of our paper is to present “quilt plots” as a useful tool with simply formulated R-functions that can be easily understood by researchers from different scientific backgrounds without high-level programming skills.

So what they’re saying is: quilt plots are heat maps. However, heat maps have complicated options. Turn those options off and you have a quilt plot. Quilt plots are written in R, which makes them easy. It’s good for people to learn R. Except that R is difficult. Especially when you use heat maps. Which are quilt plots. Which make R easier.

The last section of the discussion begins:

Although our method cannot be considered “new”, the novelty is to make these types of methodologies more accessible for researchers from different scientific backgrounds and without the need for strong computing skills.

I do not buy this argument at all. Providing a slightly simpler version of an R function is not going to “lower the bar” to using R for biologists lacking computational skills. I recommend a Software Carpentry bootcamp as a solution to that issue.

I certainly agree that the method cannot be considered new. Which raises the question: should it have been published?

We’re frequently told that the main criterion for publication in PLoS ONE is soundness of methodology. I guess this article is sound in that the code does what it says: generates a heat map. Sorry, quilt plot. However, that criterion is an over-simplification. The criteria for publication are listed here and include:

I’d argue that this is not primary research and that the statistics are not of a high technical standard. I’d even make the case that the “results” can be summarised as “how to draw a heat map”, which has been published previously and is well-known. My main argument though, would be that this does not represent an advance in either methodology or knowledge and as such, does not warrant publication in a scholarly journal. Code like this should go straight to Github, where it will be found and used by someone – if of use.

I doubt that @rvimieiro is the only person to have this thought:

This is the type of paper that makes one question the quality of a journal plosone.org/article/info:d…—
Renato Vimieiro (@rvimieiro) January 15, 2014

but that’s another blog post. For now, let’s just say that the reviewers and/or editors could have done better with this one.

ShareTweet
To leave a comment for the author, please follow the link and comment on their blog: What You're Doing Is Rather Desperate » R.
R-bloggers.com offers daily e-mail updates about R news and tutorials about learning R and many other topics. Click here if you're looking to post or find an R/data-science job. Want to share your content on R-bloggers? click here if you have a blog, or here if you don't.