[This article was first published on Marginally significant » Rstats, and kindly contributed to R-bloggers]. (You can report issue about the content on this page here) Want to share your content on R-bloggers? click here if you have a blog, or here if you don't.
ShareTweet

I’ve been dreaming on writing a manuscript about who are the pollinators for a while, but it looks I’m not going to have the time soon, so here is an early draft of what the main figure should look like: 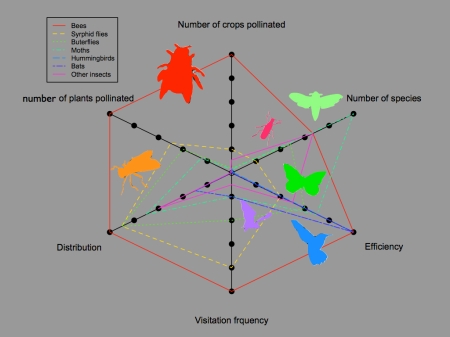 It’s surprisingly difficult to gather quantitative information on which animals are the main pollinators, and on which aspects of pollination they are good at. That figure can cover more aspects, or split the pollinator guilds in finer sub-groups, but this is just a first pass. As expected, bees are the clear winners!

I used guesstimates based on Winfree et al 2011 and the following articles:

Efficiency: That one will vary a lot among species of the same group, but based on Sahli and Conner 2007, and other few cross taxa studies measuring pollen deposition I gave values from 1 to 10 to the different taxa.

Frequency of visits: This is based on Neff and Simpson 1993 descriptive work. An update to that with recent datasets is really needed! Values from 1 to 10.

Distribution: Some taxa are widespread, while others restricted to some areas, like to the tropics. Ranked from 1 to 10.

Number of crops pollinated: Based on Klein et al 2007.

And as I know that the R code is what readers really want, here it is as a gist. I used function diamondplot{plotrix}, but I needed to edit the function first in order to scale the axes. The original function scale the groups (pollinators taxa, in my case) instead of the axes (pollination aspects) which was not desirable for my plot.

See you late January after a break!

ShareTweet
To leave a comment for the author, please follow the link and comment on their blog: Marginally significant » Rstats.
R-bloggers.com offers daily e-mail updates about R news and tutorials about learning R and many other topics. Click here if you're looking to post or find an R/data-science job. Want to share your content on R-bloggers? click here if you have a blog, or here if you don't.