[This article was first published on Statisfaction » R, and kindly contributed to R-bloggers]. (You can report issue about the content on this page here) Want to share your content on R-bloggers? click here if you have a blog, or here if you don't.
ShareTweet

I am writing way too many posts in a row on Google tools. I promise I will think about something else soon.

I find amusing the possibility to launch a search in Google images by just dragging a picture into the search box, instead of typing text. I remember that Pierre told me about it a long time ago, but this is the first time I play with it.

For example (easy) it will recognize the (supposedly) picture of our celebrated English mathematician (note that I used an objective picture name name3.jpg, at least unbiased): 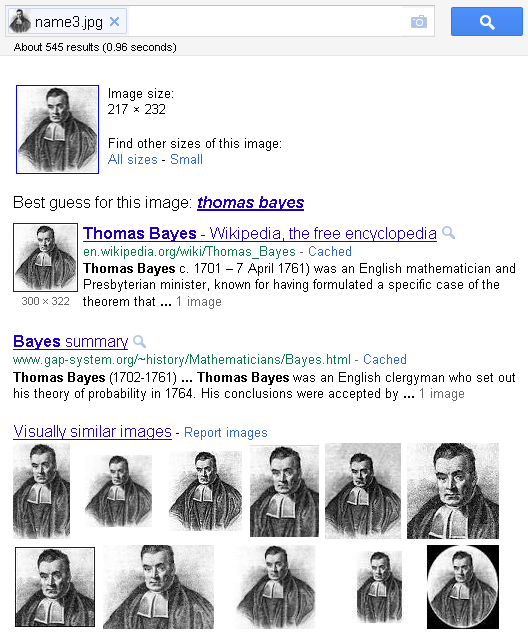 More involved is to try with a character picture. Launching a picture of Bayes’ Theorem suggests as “Best guest for this image” bayes theorem (itself!), and as first entry its Wikipedia page. So it gets it all right as with Bayes picture:

Actually, there is a trick here because the image is taken from the Internet on a page which links to Wikipedia. So I guess it uses more this piece of information than any character recognition of the formula. When the picture can not be found on the Internet, e.g. with a LaTeX typed formula, the result is not that clear. So it does not really beat the (not convincing) LaTeX search offered by Springer which looks for academic papers with some given LaTeX code.

You might also try to recover an R package from CRAN by using a plot that it produces (who knows?). For example, it will tell you that this kernel density plot produced with the diamonds dataset can be found on the ggplot2 page about geom_histogram:

ShareTweet
To leave a comment for the author, please follow the link and comment on their blog: Statisfaction » R.
R-bloggers.com offers daily e-mail updates about R news and tutorials about learning R and many other topics. Click here if you're looking to post or find an R/data-science job. Want to share your content on R-bloggers? click here if you have a blog, or here if you don't.