[This article was first published on David B. Sparks » r, and kindly contributed to R-bloggers]. (You can report issue about the content on this page here) Want to share your content on R-bloggers? click here if you have a blog, or here if you don't.
ShareTweet

A few weeks ago, I shared a series of choropleth maps of U.S. presidential election returns, illustrating the relative support for Democratic, Republican, and third Party candidates since 1920. The granularity of these county level results led me to wonder whether it would be possible to develop an isarithmic map of presidential voting using the same data.

Isarithmic maps are essentially topographic or contour maps, wherein a third variable is represented in two dimensions by color, or by contour lines, indicating gradations. I had never seen such a map depicting political data — certainly not election returns, and thus sought to create them.

There is a trade-off between an isarithmic depiction versus a choroplethic depiction, in which a third variable is shown within discrete political boundaries. Namely, that though a politically-delineated presentation better facilitates the connection of the variable of interest to the level at which it was measured, the superimposition of geographically arbitrary political boundaries may cloud the existence of more general regional patterns.

Election-year maps can be seen in a slideshow here (and compared to the three-color choropleth maps here). The isarithmic depiction does an excellent job of highlighting several broad patterns in modern U.S. political history. 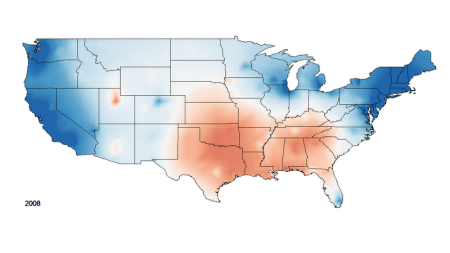 First, it does a good job of depicting local “peaks” and “valleys” of partisan support clustered around urban areas. In the 2008 map, for example, Salt Lake City, Denver, Chicago, Miami, Memphis, and many other cities stand apart from their surrounding environs, highlighted by a relatively intense concentration of voters with distinct partisan leanings. In 1980, this method shows that though Reagan enjoyed broad support in California, the revolution was not felt in the Bay Area.

Comparison of these maps across time also underscores well-known political trends, but offers more resolution than state-level choropleths and greater clarity than county-level choropleths. Note the nearly inverted maps for 1924 and 2004, between which elections the Solid South went from solidly Democratic to solidly Republican. Interestingly, though that particular regional pattern has been remarkably consistent since 1984, the South favored a Democratic candidate as recently as 1980.

These patterns over time are even better observed in motion. Interpolating support between elections, I have generated a video in which these maps shift smoothly from one election year to the next. The result is the story of 20th century presidential politics on a grand scale, condensed into a little 0ver a minute of data visualization.

The video can also be seen at YouTube (I recommend the “expanded” or “full screen” view), or at Vimeo. The images were rendered at 1280 x 720 pixels, to allow the video to be seen in HD.

This animated interpretation accentuates certain phenomena: the breadth and duration of support for Roosevelt, the shift from a Democratic to a Republican South, the move from an ostensibly east-west division to the contemporary coasts-versus-heartland division, and the stability of the latter.

More broadly, this video is a reminder that what constitutes “politics as usual” is always in flux, shifting sometimes abruptly. The landscape of American politics is constantly evolving,  as members of the two great parties battle for electoral supremacy.

Appendix on creating the visualization

Using county-level presidential returns from the CQ Press Voting and Elections Collection, I associated each county’s support in a given election year for the Democratic and Republican candidates with an approximation of that county’s centroid in degrees latitude and longitude, using the shapefiles loaded with the package mapdata.

I then used simple linear interpolation to create a smoothed transition from election-to-election, creating 99-interelectoral estimates of partisanship for each county. Using a custom function and the interp function from akima, I created a spatially smoothed image of interpolated partisanship at points other than the county centroids.

This resulted in inferred votes over the Gulf of Mexico, the Atlantic and Pacific Oceans, the Great Lakes, Canada and Mexico — so I had to clip any interpolated points outside of the U.S. border using the very handy pinpoly function from the spatialkernel package.

Finally, I created a custom color palette, a modification of the RdBu scheme from Colorbrewer, using colorRampPalette(), and plotted the interpolated data along with state borders using the excellent ggplot2.

I would like to note that I would have preferred using the Albers Equal Area Conic projection, but settled on the default Mercator projection, as drawing the Albers map with ggplot2 was prohibitively time-consuming, given that I was generating 2,201 individual frames.

ShareTweet
To leave a comment for the author, please follow the link and comment on their blog: David B. Sparks » r.
R-bloggers.com offers daily e-mail updates about R news and tutorials about learning R and many other topics. Click here if you're looking to post or find an R/data-science job. Want to share your content on R-bloggers? click here if you have a blog, or here if you don't.