By Tony Hirst
[This article was first published on OUseful.Info, the blog... » Rstats, and kindly contributed to R-bloggers]. (You can report issue about the content on this page here) Want to share your content on R-bloggers? click here if you have a blog, or here if you don't.
ShareTweet

Prompted by a joint coursemodule team to look at options surrounding a “virtual computing lab” to support a couple of new level 1 (first year equivalent) IT and computing courses (they should know better?!;-), I had another scout around and came across SageMathCloud, which looks at first glance to be just magical:-)

An open source, cloud hosted system [code], the free plan allows users to log in with social media credentials and create their own account space: 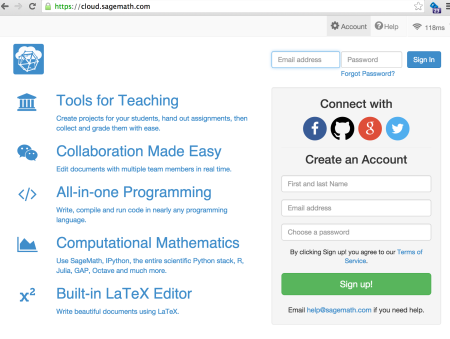 Once you’re in, you have a project area in which you can define different projects:

I’m guessing that projects could be used by learners to split out different projects with a course, or perhaps use a project as the basis for a range of activities within a course.

Within a project, you have a file manager:

The file manager provides a basis for creating application-linked files; of particular interest to me is the ability to create Jupyter notebooks…

Notebook files are opened in to a tab. Multiple notebooks can be open in multiple tabs at the same time (though this may start to hit performance from the server? pandas dataframes, for example, are held in memory, and the SMC default plan could mean memory limits get hit if you try to hold too much data in memory at once?)?

Notebooks are autosaved regularly – and a time slider that allows you to replay and revert to a particular version is available, which could be really useful for learners? (I’m not sure how this works – I don’t think it’s a standard Jupyter offering? I also imagine that the state of the underlying Python process gets dislocated from the notebook view if you revert? So cells would need to be rerun?)

Several users can collaborate on a project. I created another me by creating an account using a different authentication scheme (which leads to a name clash – and I think an email clash – but SMC manages to disambiguate the different identities).

As soon as a collaborator is added to a project, they share the project and the files associated with the project. 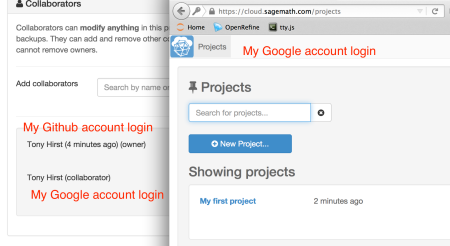 Live collaborative editing is also possible. If one me updates a notebook, the other me can see the changes happening – so a common notebook file is being updated by each client/user (I was typing in the browser on the right with one account, and watching the live update in the browser on the left, authenticated using a different account).

Real-time chatrooms can also be created and associated with a project – they look as if they might persist the chat history too?

The SagMathCloud environment seems to have been designed by educators for educators. A project owner can create a course around a project and assign students to it.

(It looks as if students can’t be collaborators on a project, so when I created a test course, I uncollaborated with my other me and then added my other me as a student.)

An course folder appears in the project area of the student’s account when they are enrolled on a course. A student can add their own files to this folder, and inspected by the course administrator.

A course administrator can also add one or more of their other project folders, by name, as assignment folders. When an assignment folder is added to a course and assigned to a student, the student can see that folder, and its contents, in their corresponding course folder, where they can then work on the assignment.

The course administrator can then collect a copy of the student’s assignment folder and its contents for grading.

The marker opens the folder collected from the student, marks it, and may add feedback as annotations to the notebook files, returning the marked assignment back to the student – where it appears in another “graded” folder, along with the grade.

At first glance, I have to say I find this whole thing pretty compelling.

In an OU context, it’s easy enough imagining that we might sign up a cohort of students to a course, and then get them to add their tutor as a collaborator who can then comment – in real time – on a notebook.

A tutor might also hold a group tutorial by creating their own project and then adding their tutor group students to it as collaborators, working through a shared notebook in real time as students watch on in their own notebooks, and perhaps may direct contributions back in response to a question from the tutor.

(I don’t think there is an audio channel available within SMC, so that would have to be managed separately?)

So what else would be nice? I’ve already mentioned audio collaboration, though that’s not essential and could be easily managed by other means.

For a course like TM351, it would be nice to be able to create a composition of linked applications within a project – for example, it would be nice to be able to start a PostgreSQL or MongoDB server linked to the Jupyter server so that notebooks could interact directly with a DBMS within a project or course setting. I also note that the IPython kernel being used appears to be the 2.7 version, and wonder how easy it is to tweak the settings on the back-end, or via an administration panel somewhere, to enable other Jupyter kernels?

I also wonder how easy it would be to add in other applications that are viewable through a browser, such as OpenRefine or RStudio?

In terms of how the backend works, I wonder if the Sandstorm.io encapsulation would be useful (eg in context of Why doesn’t Sandstorm just run Docker apps?) compared to a simpler docker container model, if that indeed is what is being used?